Brian To Return To 'Family Guy' In Future Episode 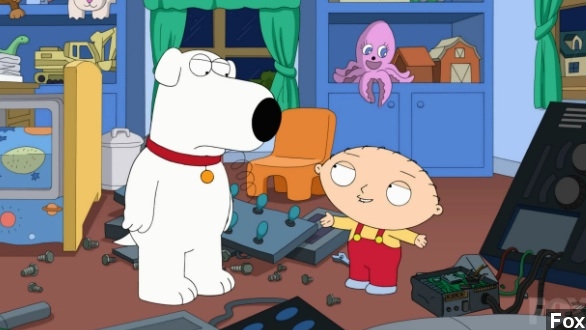 &quot;Family Guy&quot; character Brian Griffin will reportedly make a comeback to the show in an upcoming episode.

Looks like "Family Guy"'s Brian is down, but not out just yet.

Fans of Seth MacFarlane's hit series were largely devastated when the Griffin family's martini-loving canine was suddenly killed off in an episode last month. (Via Rolling Stone)

For those of you who missed it, Brian was outside playing with the overly smart, sometimes evil baby Stewie when he was hit by a car. (Via Fox)

But according to Entertainment Weekly, Brian fans can expect to see him back in action on Dec. 15's episode.

How Brian will make his return from the dead is unknown, but he will continue to appear in future episodes.

The proof is in the listings. The official plot description for the upcoming "Family Guy" Christmas credits "Seth McFarlane as Peter Griffin, Stewie Griffin, Brian Griffin." (Via The Futon Critic)

And in an episode slated to air next fall, Brian falls in love with an avid runner, voiced by "Saturday Night Live" veteran Maya Rudolph. (Via Digital Spy)

This can definitely be counted as a victory for fans who have been dying to see Brian back on the small screen.

Some particularly dedicated "Family Guy" lovers even organized a petition on Change.org to bring Brian back to the cast. As of Friday afternoon, the petition had nearly 22,000 signatures.

And, perhaps even more noteworthy, the hashtag #BringBackBrian has been popping up on Twitter ever since that fateful episode when Brian bit the dust.

But whatever MacFarlane has in store for Brian and the rest of the Griffins, it's probably been in the works for a while. MacFarlane has said in the past each episode takes up to 10 months to produce.