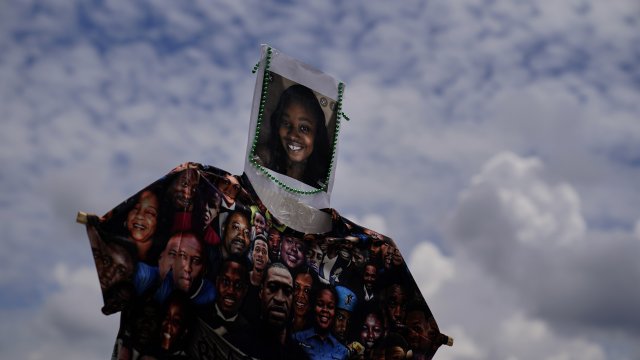 Loved ones and social justice and mental health advocates gathered Thursday to honor the life of Brianna Grier.

The 28-year-old mother of two died last month after suffering injuries while in police custody.

Investigators say Grier was having a mental health episode, so her family called 911. But instead of receiving help from medical professionals or social workers, the call was answered by Hancock County sheriff’s deputies.

Family members say they were first told that Grier kicked the door of the police cruiser open herself before falling out. However, the Georgia Bureau of Investigation found the back door of the car was left open.

Investigators say Grier was in handcuffs with no seatbelt on when she fell out of the moving vehicle and died six days later.

"It’s time for Georgia to accept that Black Lives Matter in this state, and you have to account for what happens to them in the custody and care of law enforcement," said Gerald Griggs, Atlanta attorney and NAACP president.

Advocates say deputies were not equipped to deal with Grier’s mental health emergency that day and that deaths like hers underscore a larger issue of whether police are properly trained and equipped to respond to these incidents.

"A number of incidents are happening around the country, and the fact remains they need to be investigated to determine the veracity of the claims made by the police officers who are often involved in these matters," said Leland Hardy, founder of racialbias.org.

Sharpton stood next to Grier’s open casket consoling her family before delivering the eulogy and demanding justice.

"Does the state require that you follow the law you enforce?" Sharpton said.

The Bureau is still investigating the deputies’ actions. The sheriff's office that arrested Grier does not currently have a behavioral health response team.

"She was loved, and she deserves justice, so we brought it to the only place where that could happen; that’s in front of the Georgia State Capitol where we need legislative change," Griggs said.

Grier's family members said Thursday they believe there is more to the story. They’re calling on law enforcement for increased transparency and to release additional video.