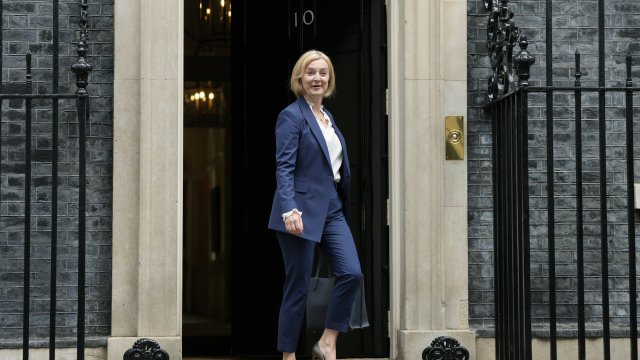 The political future of Britain's prime minister is being described as "hanging by a thread" after a humiliating reversal of her economic plan.

The about-face on the British prime minister's economic agenda in Parliament provided a revealing image: Liz Truss sitting silently as the new chancellor of the Exchequer threw out her tax cut proposals after weeks of market turmoil.

Later, she offered an apology but vowed to stick around.

"Now I recognize we have made mistakes," Truss said. "I'm sorry for those mistakes, but I fixed the mistakes. I've appointed a new chancellor. We have restored economic stability and fiscal discipline."

Despite that, a consensus is forming.

Newspapers are calling Truss a ghost prime minister — that she's in office but not in power. One tabloid, in a streaming live feed, compares her political longevity unfavorably to that of a head of lettuce.

Tony Travers, a professor at the London School of Economics, says this is an unparalleled instance of a political crisis causing an economic crisis.

The prime minister vowed to press on with other aspects of her economic plan, saying, "I want to deliver a low tax, high wage, high growth economy."

"The damage done to the Conservative Party and particularly to Liz Truss, is profound," Travers said. "In the end, she's got to go to Prime Minister's Question later this week. Her own backbenchers now risk oblivion at the next election, and this can only hold for a short time longer, I suspect."

That's a prediction shared by some Londoners.

"It's got to be a matter of days at this point," London resident Owen Eddershaw said. "I think we are basically the laughing stock of the entire world, as per usual. I think it's quite shambolic. I wouldn't be surprised if every single Tory backbencher is writing their letter of vote no confidence in the next coming days."

"I guess my big question is what is the point of the Conservative Party at the moment?" London resident Patrick Caron-Delion said. "It is the party of economic stability normally, and it's lost credibility at the moment. I think Liz Truss would be gone by the end of the week."

Truss was elected by Conservative Party members just six weeks ago when Boris Johnson was ousted.

Though there are calls within the party for her to resign, there's no agreement on a successor.