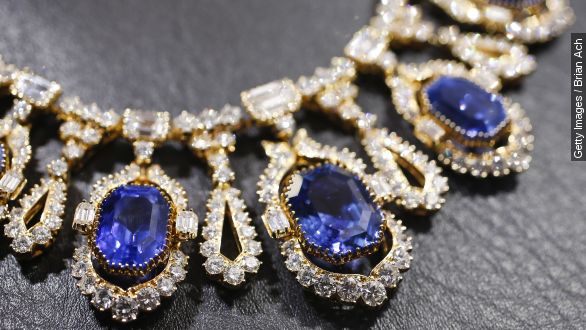 Earlier this month, the U.K. suffered one of its biggest diamond heists to date. Tens of millions of pounds worth of jewelry were stolen.

It’s a front page that, really, you can only expect from the British tabloids.

That footage, nabbed by Daily Mirror, can be seen here. And in case you weren’t sure who you were looking at, the British tabloid politely added some noms de guerre to the thieves, including Mr. Ginger, Mr. Montana, and The Gent.

The theft, which the BBC likened to the screenplay of a heist movie, happened over Easter weekend in London’s storied “Diamond District.” As many as 70 safety deposit boxes stacked with jewelry were looted throughout the three-day heist.

Numbers on just how valuable the heist was vary. The BBC says it could be up to £100 million. The Sun? Two hundred million pounds. The Daily Mirror claims £60 million.

The Daily Star has its own name for the alleged ringleader — the “King of Diamonds,” — and says it’s believed he and his partners drilled through a vault’s walls to access the diamonds.

So how does a group of thieves rob a place for three days straight without noticing?

Well, an alarm was supposedly triggered Friday, but wasn’t answered by police — or anybody for that matter — until Tuesday. It’s believed the place was deserted because of it being both Easter and the start of the Jewish Passover holidays.

Of course, British tabloids being the way they are, it didn’t take long before headlines started taking pot shots at the police.

The Sun labeled them as “bungling” while The Daily Mirror pointed to the CCTV footage saying police would have easily caught the thieves had they responded.

Speaking to Sky News, a former British organized crime investigation chief said, given the crime’s sophistication, it’s likely the jewelry is already out of the country.