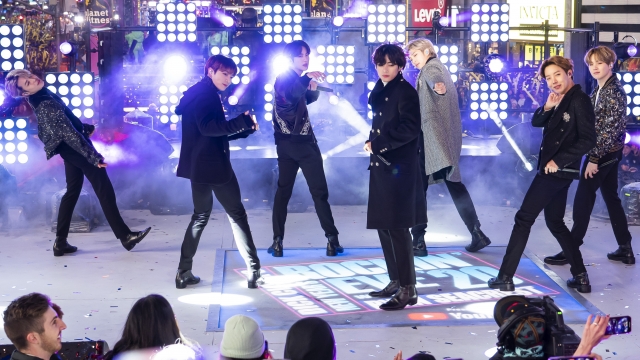 For their hit song "Dynamite," BTS is nominated for the Grammy for Best Pop Group Performance.

The South Korean boy band BTS is continuing its meteoric rise in the music industry — garnering its first ever Grammy nomination this year, as well as the first nomination for K-pop.

Shin Dong Kim, mass communications professor at Hallym University: "And there has been some attention on the fandom, the peculiar aspect of K-pop fandom, for example, Army for BTS…"

Other recent milestones of BTS includes its 2020 single "Life Goes On," which became the first non-English song to debut at No. 1 of the Billboard Hot 100. That year, Time magazine also named the group its 2020 Entertainer of the Year.

But BTS and K-pop didn't come out of nowhere. K-pop has been steadily growing its global presence — dubbed "Hallyu," or the "Korean Wave" by followers — and other groups to pave the way for BTS include the Wonder Girls, Twice, Big Bang and PSY.

Experts say that the success of South Korea's culture industries — which includes K-pop, Korean dramas and social media platforms like Line —  is a result of the country's overall socioeconomic development from the past few decades.

Shin Dong Kim: "My view was that all these things came into one grand picture together."