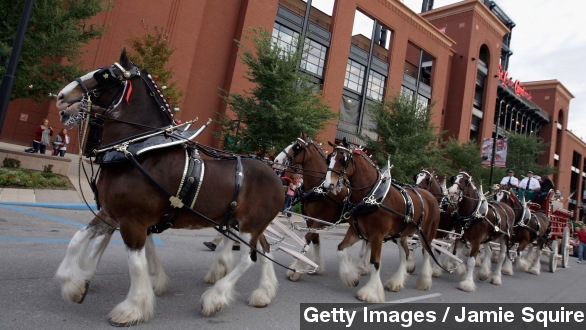 Budweiser's annual holiday ads won't feature their iconic Clydesdale horses this year, instead focusing on catering to a younger audience.

After 81 years of tireless service, Budweiser's iconic Clydesdale horses are being cut from the company's holiday commercial lineup.

The famous Clydesdales, originally a celebration of the repeal of Prohibition, have become the beloved mascots of Anheuser-Busch, making annual appearances in the company's holiday and Super Bowl commercials. Last year, Budweiser claimed the top spot in the Super Bowl ad war by featuring an adorable puppy hanging out with the gentle giants.

And outrage at the loss of the majestic horses is palpable — especially on broadcast TV.

When Bloomberg's Scarlet Fu tried to report the news, saying, "The Budweiser Clydesdales will stay in the stables —"

And the Good Morning America hosts were in agreement:

Amy Robach added, "I know, I like the Clydesdales."

And George Stephanopolis said, "They're the best Super Bowl commercials."

But the popular horses haven't been enough to turn around a struggling brand. The Wall Street Journal reports sales of regular red-can Budweiser have fallen for 25 years straight while craft beers have taken off in popularity.

Craft beer is now barely edging out Budweiser in terms of sales — which seemed inconceivable as little as ten years ago. And the problem seems to be millennial-shaped.

Journal reporter Tripp Mickle said, "According to its own research, 44 percent of 21-27 year old drinkers have not tried Budweiser. ... They've tried Bud Light, but when it comes to the traditional American lager, they just aren't getting it in their hands."

The Journal report notes Budweiser is attempting to turn this around by shelving their more traditional marketing — horses and all — in favor of millennial-friendly pitches.

These include building on the two-day music festival Budweiser started in 2012 with Jay Z, and sponsoring food festivals in addition to sporting events. The Journal even cites one zombie-themed marketing stunt, with bars serving red-dyed beer as ... "Bloodweiser."

Now, although some headlines about the Journal's report made it sound like Jay Z is personally dragging the Clydesdales out to the glue factory, neither he nor the zombies have been booked to replace the horses in Budweiser's holiday commercial, at least as far as we know.

Instead, the brewery's gone with this montage of young people holding Buds and talking about the people they miss drinking with. Which, admittedly, does kind of have a folksy holiday charm, even without the puppies and horses.

And a Budweiser spokeswoman did tell the Journal in a later report that the Clydesdales are expected to make an appearance at this year's Super Bowl commercial.

So the giant beast aren't being put out to pasture just yet — if it helps, think of this as a well-deserved vacation.