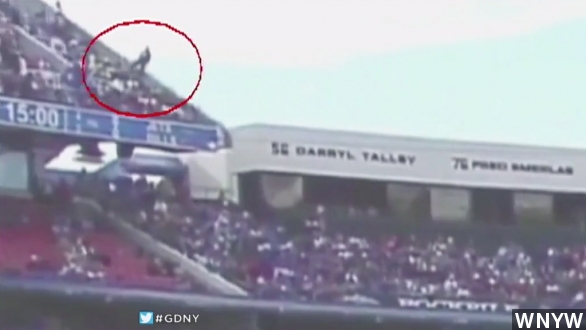 A fan fell from the 300-level seats at Ralph Wilson Stadium on Sunday, hitting another fan when he landed.

A Buffalo Bills fan fell from the 300-level seats in Ralph Wilson Stadium's upper deck Sunday. The man did survive — but we want to warn that some viewers might find the video disturbing.

He can be seen appearing to slide down the rail at Sunday's game. He then falls backwards into the crowd below in the 200-level seats. (Via WNYW)

The man who fell reportedly suffered a shoulder injury, and another fan that he fell on is reported to have suffered a head injury.

According to local station WGRZ, both were treated in the stadium, then taken to a local hospital for further observation.

One Twitter user posted a picture from the stadium, saying this was the man who had fallen, though that's unconfirmed. Neither fans' names have been released.

And intense wind was a factor at the game, with winds affecting the New York Jets' kicker. (Via Fansided)

The whole incident seemingly aired on CBS as the station was coming back from a commercial break.