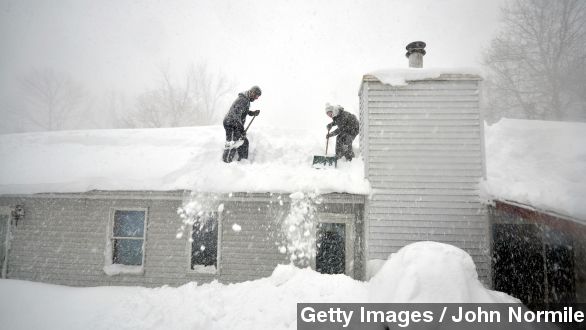 Western New York is facing a rapid rise in temperatures after a massive snowstorm — raising the risks of flooding and roof collapses.

Western New York just can't catch a break. After record snowfall buried some parts of Buffalo under more than 5 feet of snow, leading to an estimated 13 deaths in the region, the state is now bracing for a new threat — flooding.

New York Governor Andrew Cuomo said on WNYT, "There's the potential for more building collapses ... and if the temperature goes up as quickly as they're forecasting, there's a potential for significant flooding."

Temperatures are predicted to sharply rise over the weekend, which means most of the snow still on the ground is going to rapidly turn into meltwater. It's hard to predict exactly how much effect the melting snow will have on Buffalo, but flash floods and collapsing or leaking structures are very real threats. (Video via Time Warner Cable News)

The National Weather Service has issued flood warnings for the region, and workers are scrambling to clear streets and rooftops ahead of the big melt — CBS notes more than 30 major roof collapses were reported overnight Friday, and that number is expected to rise as the snow grows warmer and heavier.

But as NBC notes, there are still too many factors to accurately predict how much flooding the region will receive. "Depending on what conditions happen to be in place Saturday afternoon through Tuesday, the heaviest-hit areas of upstate and western New York could get silently smacked with the equivalent of a flash-flood-generating 18-inch rainstorm rushing into swollen creeks and sewers — or they might not notice anything at all."

Senator Chuck Schumer is petitioning the Federal Emergency Management Agency for aid, and said Saturday he expects the state to break the $27 million damage threshold which is required to start receiving federal aid money.

Temperatures in Buffalo hovered in the low 40s throughout the day Saturday; by Monday, forecasters say temps could climb as high as 60 degrees.