How The Buffalo Shooting Brought 'Supermarket Redlining' To Light 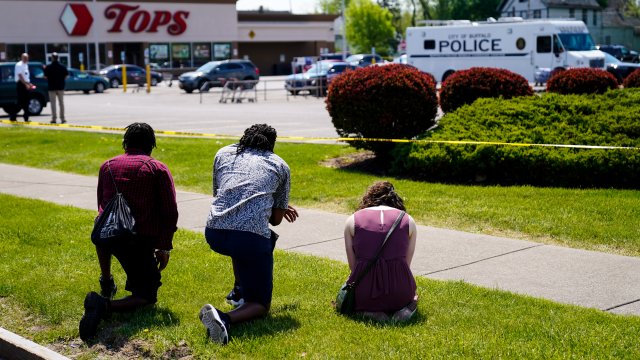 The Tops supermarket shooting has made Buffalo a food desert again, which stems from a legacy of discrimination in housing and city planning.

It’s been a little over a month since a mass shooting in Buffalo, New York, where a gunman killed 10 and injured three in a racist attack on a grocery store. Since then, the Department of Justice has charged the suspect with multiple counts of hate crimes and weapons charges.

The shooting happened at Tops, a grocery store that residents had fought for almost 20 years just to open. The neighborhood hadn't had a supermarket like it in decades, and as the store remains closed, many in the community no longer have easy access to good foods.

Before the grocery store opened, the area was known as a "food desert," which is an area with limited access to healthy and affordable food from grocery stores, supermarkets, or supercenters. The USDA considers someone to be in a food desert when they live more than a mile away from a food store in urban areas, or more than 10 miles away in rural areas. Currently, that’s more than 18 million people in the U.S.

Now, some experts and advocacy organizations have moved away from the term "food desert," saying it implies something that occurs naturally. They argue these sorts of problems actually come from a long legacy of discrimination in housing and community planning.

Dr. Lavonne Ansari, the executive director of The Community Health Center of Buffalo, hit on some of that history when Newsy sat down with her. Dr. Ansari says because of the lasting effects from redlining, it wasn't hard for the shooter to find a place to carry out his attack.

"One of the things I explained to some of my White colleagues what redlining looks like: Redlining is, as we know, is a structure that's designed to limit us where we could live," Dr. Ansari said. "In this case it happened to be a box that set us up for death because we were put so many of us in one space. So, he calculated that there would be many of us in one radius, and that's how we became the target. But one of my friends said, and and he makes a good point, he said, 'But they didn't go to the liquor stores to shoot us because there's a lot of them in the community, but there was only one supermarket.' There's something wrong with that."

Dr. Ansari is referring to the so-called “grocery gap” which dates back to the 1980s. As more Black Americans moved to cities, the country also saw “White flight,” where masses of middle income White Americans left cities for less diverse and more segregated suburbs. Supermarket chains, which largely merged and consolidated in the '80s, then followed White Americans to wealthy suburbs — a move some experts refer to as “supermarket redlining.”

The term calls back to the federal housing policies in the post-New Deal era that marked predominantly Black neighborhoods as riskier investments, prevented desegregation of neighborhoods and prevented Black families and households from growing generational wealth through home ownership.

Buffalo is a notably segregated city itself. The metro area is ranked the sixth most segregated area in the nation according to the 2010 census, which compared distributions between White and Black populations in major cities.

The shooting in Tops just brought this phenomenon of “supermarket redlining” into the spotlight. About 78% of residents in the zip code where the shooting took place are Black. The next major supermarket is about 40 minutes away on public transit, so it's easy to see how the store could become such an easy target for this hate crime.

This kind of physical, community-level segregation seeps into the culture, too, and the way we talk about our own cities and neighborhoods.

That kind of decades-long divestment and discrimination against predominantly Black or low-income neighborhoods has sprawling consequences. It’s not just a contributing factor of what left neighborhoods, like in Buffalo, with just one supermarket, but it denies communities other resources as well.