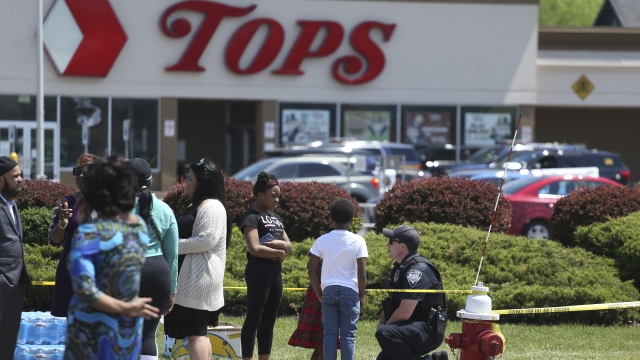 On Saturday afternoon, a white gunman in military gear attacked shoppers and workers at a supermarket in Buffalo, New York, killing 10 people and wounding three others. Most of the victims were Black. Officials said they are investigating the shooting as a racially motivated hate crime.

A look at what we know so far:

The gunman livestreamed the shooting to a small audience on Twitch for several minutes before the platform cut off his feed.

According to police, the gunman began shooting in the parking lot then moved inside the store. Security guard Aaron Salter fired multiple shots but none penetrated the gunman's armor. The gunman killed Salter and then stalked through the aisles, shooting shoppers.

When police confronted the gunman in the store's vestibule, he put his rifle to his own neck, but surrendered and dropped the gun with coaxing from the officers.

WHO IS THE SUSPECTED GUNMAN?

Police have identified the gunman, white 18-year-old male of Conklin, New York. Conklin is a small town about 200 miles southeast of Buffalo, not far from the Pennsylvania state line.

Officials said the rifle the gunman used in the attack was purchased legally but the magazines he used for ammunition were not allowed to be sold in New York.

After the shooting, the gunman appeared before a judge in a paper medical gown and was arraigned on a murder charge.

A document circulated widely online seemingly outlines the gunman's racist, anti-immigrant and antisemitic beliefs. Among them was a desire to drive all people not of European descent from the U.S. The document seemed to draw inspiration from the gunman who killed 51 people at two mosques in Christchurch, New Zealand, in 2019.

A law enforcement official told The Associated Press on Sunday that the gunman had threatened to carry out a shooting last year at Susquehanna Valley High School around the time of graduation. He was 17 years old at the time and was sent for mental health treatment. The law enforcement official was not authorized to speak publicly on the investigation and did so on the condition of anonymity.

WHO ARE THE VICTIMS?

The dead include Aaron Salter, a retired Buffalo police officer who was working as a security guard at the store. Salter fired multiple shots at the assailant, striking him at least once. Officials said he was a hero who saved lives by running toward danger. A local resident said he cared about the community and looked after the store.

Ruth Whitfield, 86, was picking up groceries after visiting her husband at a nursing home, as she did every day. She was the mother of retired Buffalo Fire Commissioner Garnell Whitfield, who told The Buffalo News she was "a mother to the motherless" and "a blessing to all of us." Whitfield attributed his mother's strength and commitment to family to her strong religious faith.

Katherine Massey was "a beautiful soul" who was killed while shopping, sister Barbara Massey said.

Among the injured was Zaire Goodman, the son of a staffer to State Sen. Tim Kennedy. The 20-year-old was shot in the neck but recovering, Kennedy said.

WHAT DO AUTHORITIES SAY ABOUT THE MOTIVE?

"This was pure evil. It was straight up racially motivated hate crime from somebody outside of our community, outside of the City of Good neighbors ... coming into our community and trying to inflict that evil upon us," Garcia said.

The FBI is investigating the shooting as both a hate crime and racially motivated violent extremism.

Authorities have declined to comment on the document purporting to show the attackers racist, anti-immigrant and antisemitic beliefs.