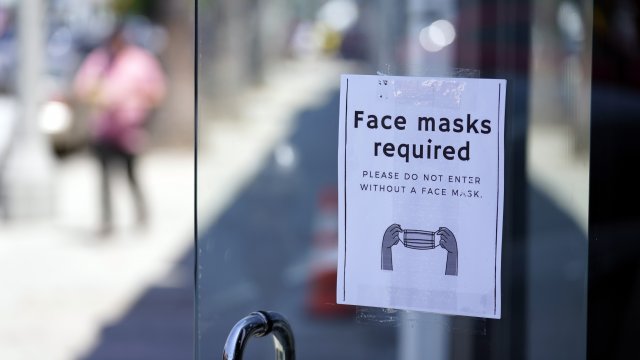 From Walmart to Disney, businesses are bringing back mask mandates for employees and visitors.

From Walmart to Disney, businesses are bringing back mask mandates for employees and visitors following the CDC’s latest guidance on masks.

States are largely holding firm to existing policies... As COVID’s spread is either “substantial” or “high” across more than 70 percent of U.S. counties.

That’s many parts of the southeast—and all of South Carolina, Missouri, Louisiana, Arkansas and Florida—where Governor Ron DeSantis is doubling-down against any mandates.

He issued an new order, directing state agencies to make sure protocols in schools don’t violate a parent's rights to make masking decisions for their kids.

Arkansas’ governor pointed to legislators to lift a ban to give local school districts authority for masks.

But Friday in Louisiana...The governor called the Delta variant a "game changer."

Governors—even Senators, like Rand Paul, have previously trashed the idea that vaccinated people should wear masks. But the science has evolved. It remains to be seen if the politics will, as well.