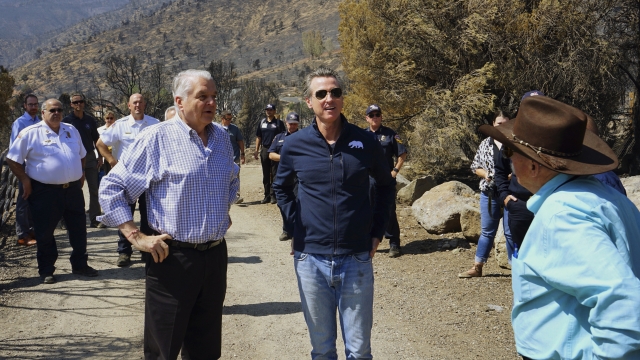 The two state leaders toured a state line area blackened by one of several massive wildfires that have destroyed dozens of homes in the western U.S.

That's the message from two state leaders as crews continue to fight several wildfires burning in the western U.S.

The governors of California and Nevada toured a state line area on Wednesday blackened by one of several massive wildfires that have destroyed dozens of homes in the West.

Cooler weather and even some rain helped in the battle against some of the largest blazes but fire officials warned that hotter, drier weather will return later in the week and could pose a threat of renewed fire ferocity.

California Gov. Gavin Newsom and Nevada Gov. Steve Sisolak, both Democrats, surveyed some of the damage from the Tamarack Fire that has swept through an area south of Lake Tahoe along the border of both states.

"I want to reach out to our federal government and say we need some more help," Gov. Sisolak said. "We need to hire more firefighters. We need to have a more federally orchestrated planned response to these fires."

The 106-square-mile Tamarack Fire was more than halfway surrounded by containment lines. At least 23 buildings have burned since lightning sparked the fire on July 4.

California’s largest blaze, the Dixie Fire, was 23% contained but remained a threat to more than 10,000 homes in the region about 175 miles northeast of San Francisco.

A historic drought and recent heat waves tied to climate change have made wildfires harder to fight in the American West.

Scientists say climate change has made the region much warmer and drier in the past 30 years and will continue to make weather more extreme and wildfires more frequent and destructive.