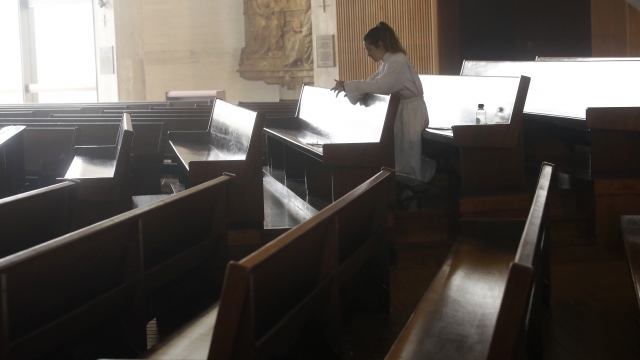 Despite Gov. Gavin Newsom's stay-at-home orders, many churches have defied them and still meet for services.

Three pastors are suing the governor of California and other officials after the government imposed restrictions on religious gatherings to combat the coronavirus pandemic.

The suit was filed in a California district court on behalf of the pastors and a church member by Dhillon Law Group — which is led by Republican party official Harmeet Dhillon.

The lawsuit argued the decision to limit church gatherings deprived citizens of "fundamental rights protected by the U.S. and California Constitutions, including freedom of religion, speech, and assembly, and due process and equal protection under the law."

Despite California Gov. Gavin Newsom's stay-at-home orders, some churches have defied them by meeting for services. One such church in northern California became a COVID-19 hotspot with 71 members becoming infected, according to the Sacramento Bee.

Ahead of Easter services last weekend, Newsom said worshippers could still go to services. However, he stressed that churchgoers should maintain social distancing and stay healthy while doing so.

Other officials listed as defendants in the lawsuit include the state attorney general and several officials in Riverside and San Bernardino County.