California Wildfires Are Causing Problems Well Beyond The Fires' Edge 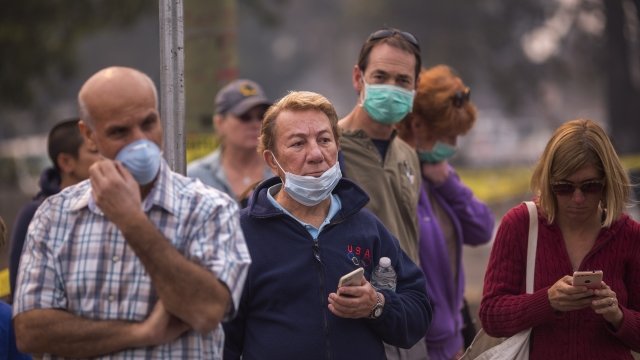 As of Friday, 10 counties had air quality that the Environmental Protection Agency considers "unhealthy."

Air quality in parts of Northern California is bad, and officials say it could get worse in the coming days.

On Thursday, officials said 21 wildfires had burned over 191,000 acres. The flames destroyed an estimated 3,500 homes and structures and killed at least 31 people.

But the fires are causing problems far beyond their perimeters.

As of Friday morning, 10 counties had air quality the Environmental Protection Agency considers "unhealthy" for everyone.

A California official said, "The pollution is so high, it's comparable to high pollution days in China."

Some of California's air is filled with air pollution called particulate matter. That's a mixture of solids and liquids so small they can be inhaled and carried to the blood stream, which can cause serious health problems.

Once the particles are in our systems, studies have shown they can aggravate asthma, cause irregular heartbeats and even lead to premature death in people with heart or lung disease.

Ocean breezes have helped kick some of the smoke out of the densely populated San Francisco area. But one official called this the "the worst air quality ever recorded for smoke in many parts of the Bay Area."