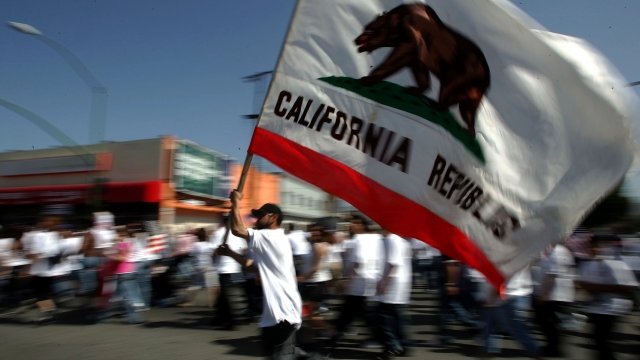 Already a dozen conservative cities and counties have stood against California's sanctuary law, which extends protections to undocumented immigrants.

In parts of Southern California, conservative resistance to the state's pro-immigration laws seems to be growing.

Since the Trump administration sued California last month over the state's sanctuary law, a dozen local governments have voted to either join or support the lawsuit, or to opt out entirely of the pro-sanctuary policy.

That policy, known as Senate Bill 54, was signed by California Gov. Jerry Brown in October. It extends protections to immigrants statewide and limits cooperation between local law enforcement and federal immigration agents.

"And let me be clear, we will defend everybody. Every man, women and child who's come here for a better life and has contributed to the well-being of our state," Brown said during his 2017 State of the State address.

But the lawsuit against California seems to have galvanized activists who oppose illegal immigration in the Golden State. They say they believe California has gone too far in resisting the president's crackdown on those who enter the country illegally. The sanctuary law, they argue, unduly complicates the job of immigration officers to find and deport such immigrants — especially those once held in local jails or prisons.

"There's 3.5 million San Diegans to protect," the chairwoman of the San Diego board of supervisors told Fox News. "There's a lot at stake. SB 54 didn't make our community more safe; it made our community less safe." San Diego County recently voted to support the lawsuit against California.

California Gov. Jerry Brown had some heated comments for the Trump administration after the U.S. Justice Department's recent lawsuit.

"Do we really want to support criminals in the community? Senate Bill 54 is not supporting illegal aliens; it's supporting criminals who also happen to be illegal aliens," said another women during another city hall meeting in Aliso Viejo.

On the other hand, immigrant rights advocates support the state's sanctuary law because, they say, it encourages immigrants to report crimes without fearing deportation.

"Not once have I felt at risk from an undocumented immigrant, so it's ridiculous that the city council tonight is taking up this issue to sue the state and waste our tax dollars on an unnecessary lawsuit," said a woman during the Aliso Viejo meeting.

As midterm elections near, experts also say the rebellion against the sanctuary policy might be further fueled by local Republicans who are willing to keep pounding on an issue they know mobilizes their base.