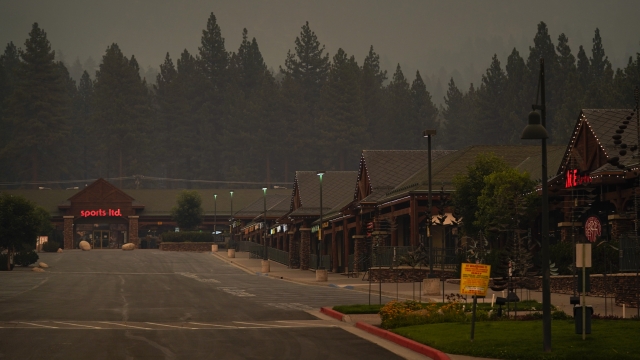 Meanwhile, the entire state is showing the potential for extreme fire danger in the next three months.

California could be on track for one of its worst fire seasons ever as hotter, drier conditions across the north raise the threat of new fires or existing ones flaring into dangerous life, officials said.

Crews on Tuesday cut miles of new containment line around the Caldor Fire, which was 50% contained after burning up and over the crest of the mountain range and threatening South Lake Tahoe.

Evacuation orders for 22,000 residents were lifted Sunday and more orders were reduced to warnings on Tuesday. But elsewhere, some existing large fires continued to grow.

New evacuations were ordered for some areas of Trinity and Siskiyou counties as the River Complex of three wildfires spread. One blaze driven by strong winds jumped a creek, according to the California Department of Forestry and Fire Protection.

Since Monday, the fires had grown by more than 20 square miles. It was 19% contained.

More than 15,500 personnel were working on 14 active large wildfires in the state and new or existing fires could flare up this week as the weather turns more dangerous, said Tony Scardina, the U.S. Forest Service’s deputy regional forester for California.

California's energy grid operator issued a statewide call for voluntary electricity conservation from 4 p.m. to 9 p.m. Wednesday because of expected higher demand for air conditioning because of high temperatures.

Temperatures could top 100 degrees in the Sierra foothills, according to the National Weather Service.

Meanwhile, the entire state is showing the potential for extreme fire danger in the next three months, Cal Fire Chief Thom Porter said.

“We’re right smack in the middle of wildfire peak season,” he said. “And so everybody needs to remain vigilant.”

About 3,125 square miles of land have burned so far this year, similar to the record 2020 fire season, Porter said.

“We are on par with where we were last year. That’s sobering, and that is the new reality,” he said.

California has experienced increasingly larger and deadlier wildfires in recent years as climate change has made the U.S. West much warmer and drier over the past 30 years. Scientists have said weather will continue to be more extreme and wildfires more frequent, destructive and unpredictable.

The good news was near the Nevada state line, where the Caldor Fire was practically stopped in its tracks a few miles outside of South Lake Tahoe. While the fire that began Aug. 14 burned nearly 800 homes and gutted the mountain hamlet of Grizzly Flats but hadn't burned any homes on its eastern edges.

Crews had largely been able to keep the flames away from populated areas. Some sections of the perimeter were a concern but on much of the blaze, the work turned to mopping up, pulling miles of fire hose out of the forest and knocking down dangerously weakened trees.

However, trees and other vegetation in the area remain tinder-dry and southwest winds are expected to pick up that could make for larger fire growth, authorities said.

North of the Caldor Fire was the Dixie Fire, the second-largest in the state’s recorded history, which also has burned through rural, forested communities.

However, for the first time in days, there was little fire growth in the eastern zone, where firefighters in the past two weeks had built about 25 miles of containment line, Cal Fire said.

The blaze, which started in mid-July, was 59% surrounded after burning more than 1,400 square miles in five counties and burning nearly 700 homes. It could become the largest wildfire in state history, fire officials said.