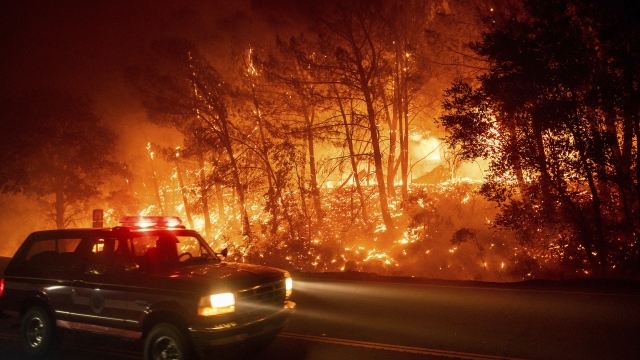 Residents flee communities in the San Francisco Bay Area and California’s famed wine country as fires rage in nearby brush lands and forests.

California continues to be ablaze in another extreme fire season. Scores of active wildfires, many caused by lightning strikes, had burned over 400,000 acres, or 625 square miles, by Thursday.

Residents have fled several communities in the San Francisco Bay Area and California’s famed wine country as fires rage in nearby brush lands and forests.

Those evacuated include non-essential personnel at Northern California’s Travis Air Force Base and patients from Adventist Health St. Helena Hospital in the Napa Valley.

By Thursday, more than 130 homes and other structures had been destroyed, with thousands more threatened.

"We have in place numerous evacuation orders and warnings in place, working with the sheriff's office. Even if we were at full strength, with all the fires that we're currently seeing, we would be - we are - woefully short of resources, period," said Cal Fire Operations Section Chief Mark Brunton.