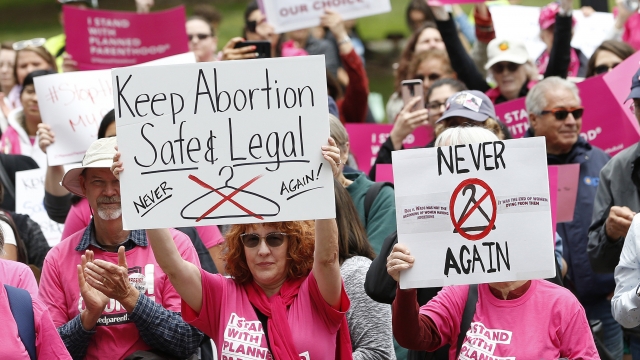 "Abortion remains legal and protected in California. We have your back," said California Governor Gavin Newsom.

The new site is a direct appeal to women in seven GOP-led states where abortion bans are in effect or in motion.

In those seven states Newsom ran a billboard campaign directing people to the new website.

Republicans are blasting him for the move. South Dakota Governor Kristi Noem defended her state as a "destination for freedom and life."

This is a new push as Democrats at a national level make abortion a centerpiece of their midterm election pitch. They're arguing Republican wins this fall would galvanize the party around a national abortion ban, which Senator Lindsey Graham proposed this week.

The bill would prohibit the procedure after 15 weeks of pregnancy with rare exceptions.

"I think we should have a law at the federal level that would say after 15 weeks, no abortion on demand, except in cases of rape, incest, to save the life of the mother. And that should be where America is at," said Graham.

The latest Pew Research data shows adults think abortion should be legal in most or all cases, as Republicans hesitate to embrace Graham's bill.

"I think most of the members of my conference prefer that this be dealt with at the state level," said Sen. Mitch McConnell, the Senate Minority Leader.

California is now trying to solidify its place as a sanctuary state in a country where most people want abortion access, but many states restrict it.

"Visit abortion.ca.gov to learn more about your freedom to choose in California," said Newsom.

The site offers ways to find, get to and pay for abortion services from in or outside California.

A political strategy, no doubt, but a potentially critical move for people looking for abortion care in states where it's not allowed.

"These are extremely personal decisions that women make and should only make in the context of their lives, their faith, their medical needs, not with what the congressman from their district thinks they should do," said Rep. Katherine Clark.

Senators did pass a change that cuts the time that victims of rape and incest who become pregnant can seek an abortion from 20 weeks to 12 weeks.