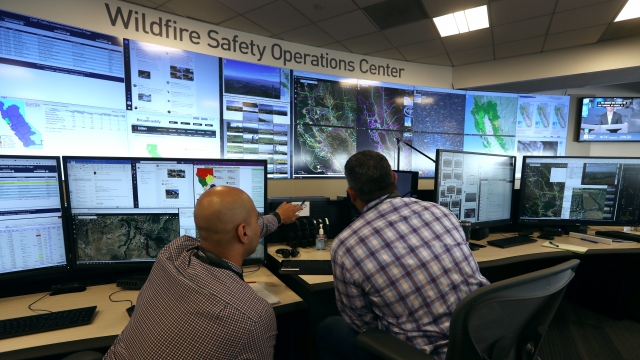 After facing blame for a catastrophic Northern California fire, the powerful utility is ripped for mismanagement for imposing sweeping blackouts.

California's powerful private utility, the Pacific Gas & Electric Co., is facing a state investigation and a blizzard of lawsuits over whether its transmission line set off the catastrophic fire that killed 85 people in the Northern California town of Paradise.

Now, a year after that fire, PG&E is in more trouble. This time its over the company's decision to shutoff power to more than 500,000 Californians  - and potentially two million - over a wind storm continuing through Thursday.

PG&E says its action was intended to prevent another major blaze. Now it is facing condemnations for mismanagement and calls to break-up the company or fire some - or all - of its board of directors.

California Gov. Gavin Newsom acknowledged the utility responded to protect public safety amid windy and dry conditions. He suggested it was because PG&E has historically failed to maintain its lines and keep them free from flammable vegetation.

"I'm outraged because it didn't need to happen," Newsom said of the shutoff. "They're in bankruptcy because of their terrible management going back decades. They created these conditions."

PG&E filed for bankruptcy protection and is seeking a rate increase to recoup potential losses after the fire in Paradise destroyed 13,500 homes and totaled damages of $7.5 billion to $10 billion.

California's Public Utilities Commission is now considering breaking-up PG&E into regional companies, forcing changes in its management or converting the company to a public utility.

Commission President Michael Picker says he wants guarantees that PG&E can make reforms to protect public safety. He also said: “This process will be like repairing a jetliner while it’s in flight. Crashing a plane to make it safer isn’t good for the passengers.”

PG&E insists it's serious about protecting the public. Explaining its decision to enact power outages, the company's vice-president for wildfire safety said, "We are doing everything we can."

State officials are skeptical. They blame PG&E equipment failures for as many as a dozen California wildfires.