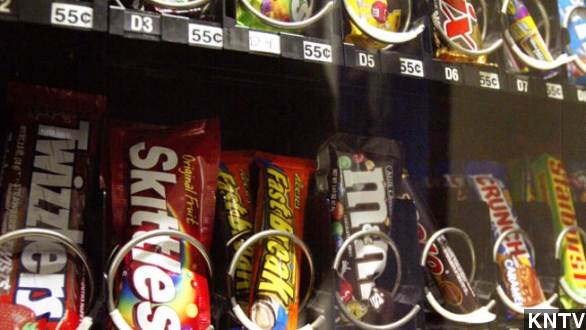 As part of Obamacare, the new rule will let you know just exactly how bad that candy bar or bag of chips actually is for you.

Office workers looking for a midday pick me-up might be running into a bit of a buzzkill in the near future — when a lesser known provision of the Affordable Care Act goes into effect.

"A new law will require calorie information to be displayed on vending machines. It’s part of President Obama’s new health care overhaul law and it will impact about 5 million machines around the country." (Via News 12 The Bronx)

Essentially, the new rule — which goes into effect early in 2014 — will let you know just exactly how bad that candy bar or bag of chips actually is for you.

It’s intended to help Americans make healthier decisions when it comes to snack choices. But some of the owners of the nearly 11,000 companies affected by the rule are calling it unnecessary and expensive. (Via YouTube / bigshredder)

Quoted by KNTV one vending machine company owner said, "It is outrageous for us to have to do this on all our equipment. How many people have not read a label on a candy bar? If you're concerned about it, you've already read it for years."

Others focused more on the cost of complying with the law and how it could affect typically small companies operating on small profit margins. (Via YouTube / dieselducy)

Newsy's Heath and Science correspondent Lindsey Theis looks into whether nutrition advice is helpful or confusing.

According to NBC, “The FDA estimates this change will cost the vending machine industry $25.8 million up front, and $24 million a year after that.”

But that could be a calculation the Obama Administration had taken into account previously. As CNN reports those costs may balance out elsewhere in the economy.

Better health and lower health-care costs? That’s likely a trade-off the government is willing to make. According to a 2008 CDC study, more than 35 percent of Americans are obese — and health care costs related to obesity in the U.S. in 2008 hit $147 billion.

But it won’t just be vending machines providing new health information in the new year.

Under the healthcare law the FDA is reportedly also working on rules to require restaurants with 20 or more locations to provide calorie info. (Via YouTube / BarackObamaDotCom)

The vending machine provision will only affect companies that operate 20 or more machines. They will have one year to comply with the law.