Can Broadcast TV Still Keep Up With Streaming And Premium Cable? 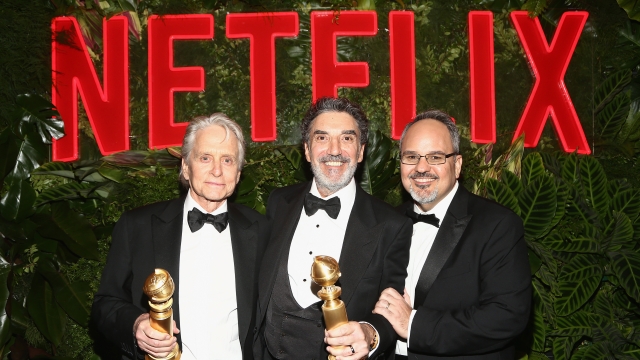 Companies like Netflix and HBO knocked traditional broadcast networks out of the Golden Globes competitions.

"If you look across all the 25 categories, you see outstanding work, you see the coming-of-age of the streaming services, you see the reflection of this new world."

Network television long dominated the Golden Globes with shows like "All in the Family," "The Golden Girls" and "The West Wing." But for the first time ever, streaming and premium cable companies completely knocked the networks out of the races. With 17 nominations, Netflix is the most-nominated company in the television categories. HBO follows closely with 15.

"This tide has been building for years. The sheer number of the streaming and the premium cable is — it's kinda crazy. It's kind of like the reverse of when cable started. Cable took some time to get into the game. Now it's like the new stuff is shutting out the old, you know, old guard, basically."

The last traditional broadcast series to win best comedy was Fox's "Brooklyn Nine-Nine" in 2014, and the last to win best drama was "Grey's Anatomy" in 2007. This year, some of the biggest surprises in the television category was the lack of nominations for past favorites like "This Is Us" or "The Good Place," which is ending this year.

Holbrook attributes the advantages of streaming and premium cable to three things: money, timing and talent.

"The streaming and the premium cable, like, they've got the money. They've got the schedules. The talent is drawn to those, like, 13 episodes, 10 episodes, you know, 'We can film it in six weeks and we're done.' That's why they're getting this talent that then attracts those nominations, and the Hollywood Foreign Press in particular. They love a star-studded party."

"We have 1,245 seats, and the world of film and television has gotten so much bigger. We have additional studios, we have the streaming platforms, we have Apple."

So, with all of that in mind, what can traditional broadcast networks do to stay competitive?

"I'm really hoping that the networks start to look at shorter seasons. ... Y'know, in 23 episodes, you are going to get a bunch of stinkers, but when you've got something like 'Fleabag's' second season is literally the perfect TV season. It's six episodes. It has a clear vision. It has awesome writing. It's got consistency. When you're talking about a show like 'This is Us' or 'Modern Family' even, where there's multiple directors and multiple storylines and they've got to stretch it out over all this time, it's really hard to keep up that quality."