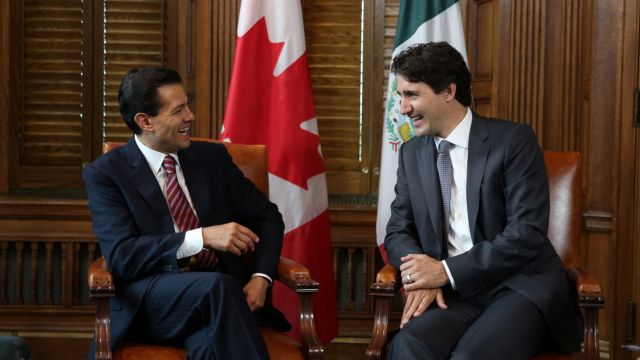 This announcement comes one day before Trudeau is set to meet with the U.S. and Mexico presidents.

It's about to get a whole lot easier for Mexicans to head north. To Canada, at least.

After months of promising to lift travel visa requirements for Mexican citizens, Prime Minister Justin Trudeau officially set the date for the change.

Back in 2009, the then-Conservative government enacted visa requirements in an effort to curb the number of Mexicans seeking asylum in the country.

But many argued the move put business relations on the rocks and sent tourism spiraling. Trudeau toppled the Conservative leadership in 2015, in part, thanks to his vow to change policies like this one.

In a statement released Tuesday, his office wrote, "Lifting the visa requirements will deepen ties between Canada and Mexico and will increase the flow of travellers, ideas, and businesses between both countries."

The announcement comes the same day Mexico's president agreed to lift restrictions on Canadian beef imports, and just one day before the two are set to meet with President Barack Obama for the so-called Three Amigos summit.