Canadian Flights Diverted After 3 Threats In A Week 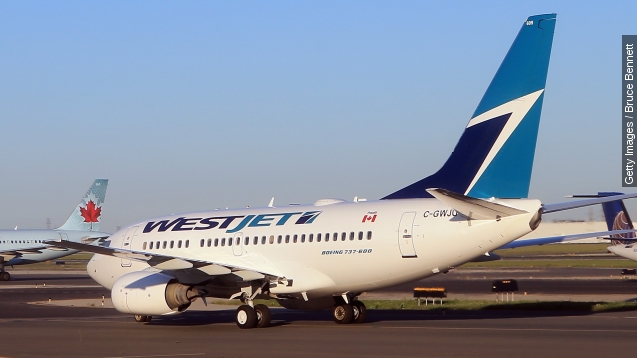 Canadian authorities are looking for answers after three threats were made to flights in Canada during the past week. No arrests have been made.

Canadian officials are investigating a string of threats against flights in the past week — the most recent forcing an emergency landing of a WestJet plane.

WestJet flight WS 442 was diverted to Winnipeg, Manitoba, Monday night after a threat was made. The flight landed safely to a host of police, firefighters and paramedics. Six passengers reportedly suffered non-life threatening injuries while exiting the plane.

Officials still aren't disclosing exactly what the threat was.

"They're not saying what kind of threat it was, and they're still investigating the origins of that call," CBC reports.

The plane of 54 passengers and five crew members was traveling from Edmonton, Alberta, to Toronto when the threat was made. No explosive device was found.

"A threatening phone call was made claiming there was an explosive device on board after takeoff," Saskatoon Police's Kelsie Fraser told reporters.

Another incident occurred on an Air Canada flight at St. John's International Airport in Newfoundland last Thursday after a threatening note was found in a plane's bathroom before takeoff. (Video via Newfoundland TV)

The threats come during a particularly somber time for the nation. June 23, 1985 is Canada's worst terrorist air tragedy ever as Air India Flight 182 exploded en route from Montreal to India.

"Controllers at Shannon heard a brief cry," The National reported.

Investigators later concluded a bomb blew up the plane. All 329 passengers and crew were killed.

No arrests have been made in any of the three threats in the past week.

This video includes images from Getty Images, Stephen Harper / CC BY NC ND 2.0 and Ian Kirby / CC BY SA 3.0 with music from Chris Zabriskie / CC BY 4.0.