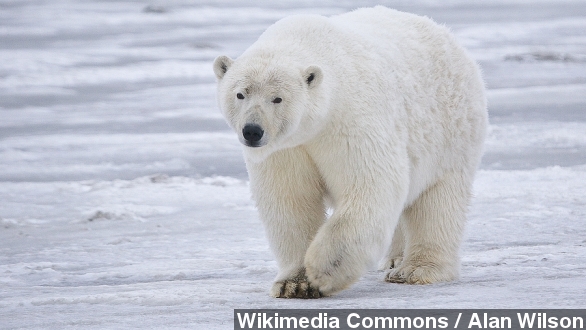 A Canadian woman was attacked by a polar bear on a street, making this the third attack this year for the small town riddled with bears.

A woman in Canada was attacked by a 400-pound polar bear and lived to tell the tale. She and her friends were just crossing a street when they spotted the polar bear.

ERIN GREENE: "Within seconds of seeing him, he was already on my head and just kind of scratching at me and biting my head and pulling." (Via KUTV)

The bear apparently chose Greene out of the group. She said: "My friends started running, but the bear was so quick, and it was so close to us. I knew that it was going to get us. And it was very focused on me. Its eyes were locked on mine, so I was his target." (Via New York Daily News)

Her injuries were extensive.

"The bear tore off part of her scalp. It took 35 staples to reattach it. The 400-pound animal also sliced open Greene's knee, bit off a chunk of her ear and left puncture marks in her arms." (Via CBC)

A 69-year-old man was watching TV when he heard her screams. He managed to hit the bear in the head with a shovel and got it to drop her. He also suffered injuries and was hospitalized. (Via Animal Planet, Wikimedia Commons / Alan Wilson)

The town of Churchill in Manitoba is famous for living closely with polar bears. In fact, much of its industry comes from bear-seeking tourists. Churchill sits directly in the migration path, and hundreds of bears travel near or through it each year. (Via National Geographic)

But melting sea ice has left the normally standoffish bears without homes, hunting grounds and food. And the townspeople are suffering the consequences. (Via Flickr / Martin Lopatka, Wikimedia Commons / Ansgar Walk)

Greene's attack marks the third this year — scary, considering there have only been a few in the past 50 years. Wildlife biologist Tom Smith said it's because the bears are getting desperately hungry.

​"Most of us expect to see an upswing in human-bear conflict because the animals, as they get more desperate, start taking more risks." ​(Via The Guardian)

The community that is speckled with ambling polar bears has organized a fundraiser to help Greene with her emergency air-lift bills.