Canadians Vote In Election That Could Oust Prime Minister Trudeau 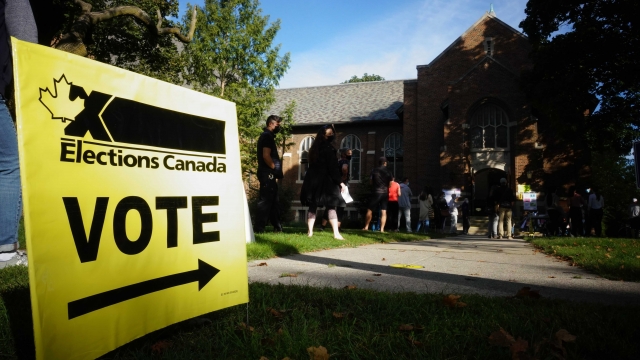 Trudeau is riding the wave of his COVID response and high vaccination rates but polls show him in a tight race with Conservatives.

Trudeau gambled on an early election in a bid to win a majority of seats in Parliament. But the opposition has been relentless in accusing Trudeau of calling an unnecessary early vote during the pandemic — two years before the deadline — for his own personal ambition.

Polls indicate Trudeau’s Liberal Party is in a tight race with the rival Conservatives: It will likely win the most seats in Parliament, but still fail to get a majority, forcing it to rely on an opposition party to pass legislation.

Trudeau entered the election leading a stable minority government that wasn't under threat of being toppled.

The 49-year-old channeled the star power of his father, the Liberal icon and late Prime Minister Pierre Trudeau, when he first won in 2015, but a combination of high expectations, scandal and calling the election last month during the pandemic have hurt his brand.

Trudeau is betting that Canadians will reward him for navigating the coronavirus crisis better than most countries did. Canada is now one of the most vaccinated nations in the world and Trudeau’s government spent hundreds of billions of dollars to prop up the economy amid lockdowns.

Conservative leader Erin O’Toole hasn’t required his party’s candidates to be vaccinated and won’t say how many are unvaccinated. He describes vaccination as a personal health decision.

A Conservative win would represent a rebuke of Trudeau, who now is at risk of losing office to a politician with a fraction of his own name recognition. O’Toole, 47, is a military veteran, former lawyer and a member of Parliament for nine years.

If O’Toole wins, he has promised to take a tougher stand against China, including banning Chinese technology giant Huawei from Canada’s next generation of telecommunication networks.