Car Thefts Are On The Rise 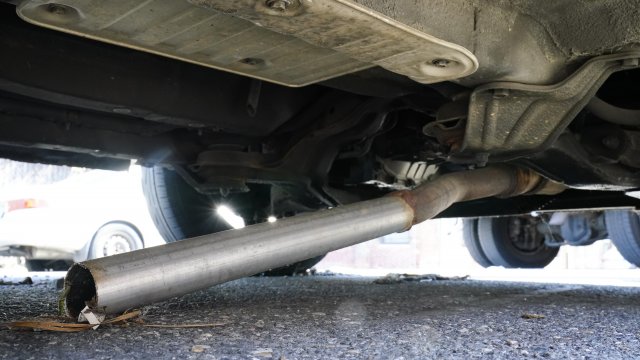 Inside was thousands of dollars' worth of lawn care equipment that fueled Gonzalez’s livelihood.

“It’s a cutthroat business," said Gonzalez, owner of Havana Gardens Lawn & Landscaping. "If you're not there on a certain day that you tell your customers you’re gonna be there, they look for someone else.”

Thieves made off with machinery and truck parts worth $65,000.

Like in Washington D.C., New York and Wisconsin — and up to a 79% spike in Colorado.

In another staggering statistic, carjackings spiked triple digits in some parts of the country: 286% in New York and 238% in Philadelphia.

In New Jersey, authorities believe adults are paying minors as much as $1,000 per vehicle, knowing they won't get in as much trouble when they’re caught.

In the first half of 2020, U.S. and Canadian law enforcement tracked down stolen cars bound for Europe, Africa and the Middle East totaling nearly $3 million.

Savvy crooks are also targeting the most precious parts of the cars.

There's A Rise In Catalytic Converter Thefts Across The U.S.

Rhodium is used in car converters, but as the rarest metal in the world, it's also valued for jewelry, high-end mirrors, and electrical devices.

Between 2020 and 2021 catalytic converter thefts more than quadrupled, with 65,000 stolen nationwide.

The converters are partly made with rhodium, one of the rarest metal on earth.

Every ounce of it can top $15,000 and is also valuable for jewelry, high-end mirrors and electrical devices.

In Tampa, police busted one recycler last year who advertised on social media he was paying cash for converters and seized his paperwork.

It showed that he had made well over $800,000 in about a year’s time just with the receipts.

One way people are trying to prevent theft is having their car’s VIN etched onto the converters.

Chicago is trying a pilot program that will spray paint the converters hot pink and mark them with a Chicago Police Department stencil.

But Joe Dipasquale, who works for Auto Zone, says criminals are targeting pretty much everything car-related right now.

“They’ll put their hands on anything they can turn around and flip," Dipasquale said. "Tools are one of the things that go really quickly because they’re expensive.”

Officials have this advice: Keep your auto policy up to date, roll up your windows, lock your doors, park in well-lit areas and never leave behind your keys or any valuables.