Cardinals-Packers Playoff Game Is Being Called The 'Best Game Ever' 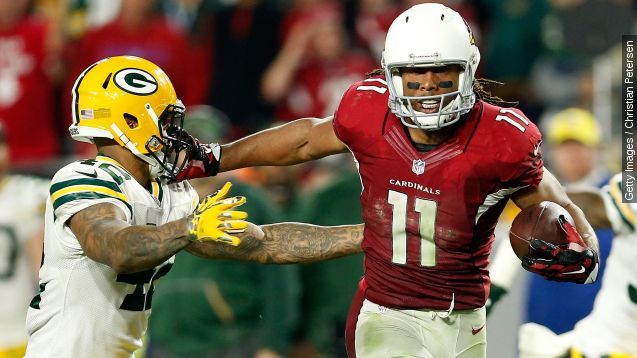 The Arizona Cardinals' 26-20 win over the Green Bay Packers in the NFC divisional playoff game was an instant classic.

An end of regulation Hail Mary, a controversial coin toss and a walk-off touchdown.

The Arizona Cardinals' 26-20 win over the Green Bay Packers in the NFC divisional playoff game is getting "best game ever" recognition and for good reason.

It was a solid back-and-forth game the whole time, but it went from good game to great game with the help of three noteworthy moments.

Packers wide receiver Jeff Janis somehow hauled in a 41-yard Hail Mary as time expired, tying the Packers and Cardinals at 20 after the extra point.

That's when the NFL's often talked about overtime rules came into play.

First, was the all important coin toss. After the Packers picked "tails," the first coin toss was called off because the coin never flipped in the air.

As ESPN points out, "The NFL rule book contains detailed instructions for a coin toss but does not mention a requirement that it flip."

A re-toss landed on "heads," giving the Cardinals the ball. Arizona would've won the first toss, too.

With the NFL overtime rules, winning the coin toss is extremely important. If the receiving team scores a touchdown, the game is over. But if they fail to score or only score a field goal, the other team has a chance to win it.

But Cardinals wide receiver Larry Fitzgerald made sure that wouldn't be an issue. He took a short pass 75 yards down the field to the five-yard line and scored a touchdown two plays later.

The Cardinals will now advance to the NFC Championship game, playing the winner of the Seahawks-Panthers divisional game.