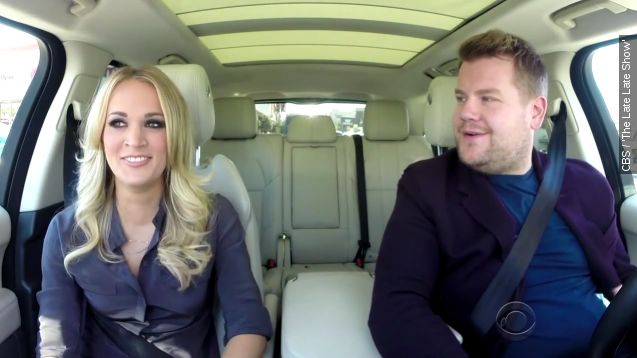 "Late Late Show" host James Corden has convinced yet another celebrity to take a ride in his car and belt out songs with him — Carrie Underwood.

"Late Late Show" host James Corden has convinced yet another random celebrity to take a ride in his car and belt out songs with him.

And thankfully he wasn't "Blown Away," because this time, his Carpool Karaoke victim was none other than Carrie Underwood. (Video via Sony Music Entertainment / Carrie Underwood)

"Jesus take the wheel, take it from my hands," James Corden and Carrie Underwood sang on "The Late Late Show."

James and Carrie made their way around Los Angeles while singing along to some of the country star's most popular tunes.

But their karaoke cruise wouldn't have been complete without a quick pit stop to snag James some attire to match the music.

Carrie definitely looked like she was enjoying herself during the quirky ride.

And James told the New York Post earlier this year that's what he aims for during his Carpool Karaoke sketches. (Video via TBS / "Conan")

"We shoot them for about 40 minutes and they’re completely on their own: It's me and them and fixed cameras and that's it. I think they find that very liberating and there's a joy in that I'm very proud of," James said.

We can't wait to see who James will target for his next installment in the series. We vote Kanye.