Cassini Spacecraft Gets A 'Goodbye Kiss' Before It Meets Its End 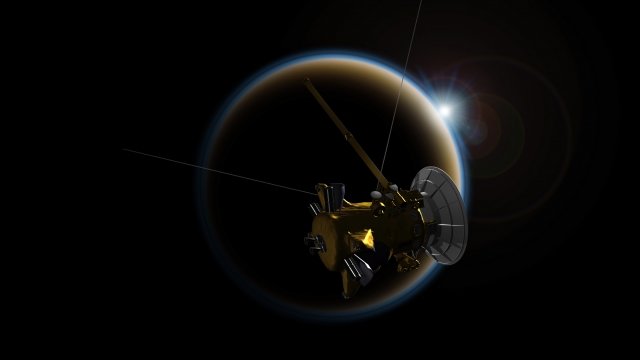 Cassini made its final flyby of Titan, a moon it's visiting almost every month for over a decade.

The Cassini spacecraft got a "goodbye kiss" as it prepares to meet its end.

Cassini made its final flyby of Titan, Saturn's largest moon, on Monday.

The spacecraft's project manager says it's really like Cassini and Titan have been in a long-term relationship.

In the 13 years that Cassini's been studying Saturn and its moons, it's flown by Titan pretty much every month for over a decade.

During those hundreds of passes, Cassini's discovered liquid seas and lakes made of liquid methane. It mapped sand dunes that scientists think are made of solid water ice.

Its gravity measurements unveiled Titan's underground ocean of liquid water, meaning the moon could have a habitable environment.

What We Know About The Secretive Space Plane SpaceX Just Launched

We don't know much about the Air Force's latest X-37B space plane mission. Most of its payload is classified.

Cassini even launched the first human-made object to land in the distant outer solar system. And it landed on, you guessed it, Titan.

The phrase relates to Titan's gravity pushing the craft toward its final mission — a dive straight into Saturn's atmosphere. Cassini will transmit as much data as possible before it burns up.