Castro: Illegal Border Crossing Used To Be Enforced As A Civil Crime 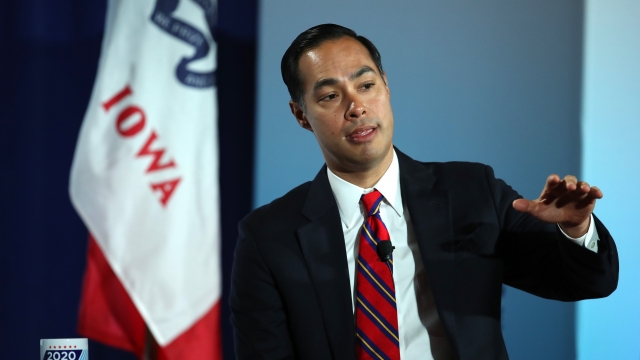 Julián Castro wants to decriminalize crossing the border, and he's taking aim at the federal law that makes it a crime.

Some of the Democratic presidential candidates have been talking about decriminalizing crossing the border, including Julián Castro.

"This is a law that was put into place in 1929 — by a segregationist, by the way. But from 1929 until 2004, it actually, even though it was on the books as a crime, it was mostly enforced as a civil violation," Castro said.

Castro is talking about one particular section of federal immigration law. We'll look at whether his description of the law's origin and its enforcement is accurate.

Section 1325 of the Immigration and Nationality Act says it's a crime to cross the U.S. border "at any time or place other than as designated by immigration officers."

The origin of that law dates back to 1929, when Congress first made it a misdemeanor to enter the U.S. without proper approval. It also made it a felony to illegally enter the U.S. after being deported. That law was spearheaded by Sen. Coleman Livingston Blease, a man historians have described as an "unrepentant white supremacist."

Federal authorities did enforce the law in the criminal court system after it was passed. A 1930 report from the U.S. Attorney General's Office cites the law as the reason for a stark increase in criminal immigration cases. And in the following decade, the federal government continued to prosecute thousands of people under that law every year.

World War II halted that trend, and prosecutions for illegally crossing the border remained low until 2005. That's when then-President George W. Bush launched "Operation Streamline," an initiative that bumped up prosecutions of illegal entry along the southwest border. Before that policy change, people caught crossing the border illegally for the first time were typically referred to the civil immigration system, or they were released into the U.S. and told to return for a future court date.

So the history books largely confirm Castro's statement that illegally crossing the border was "mostly enforced as a civil violation" until the mid-2000s.