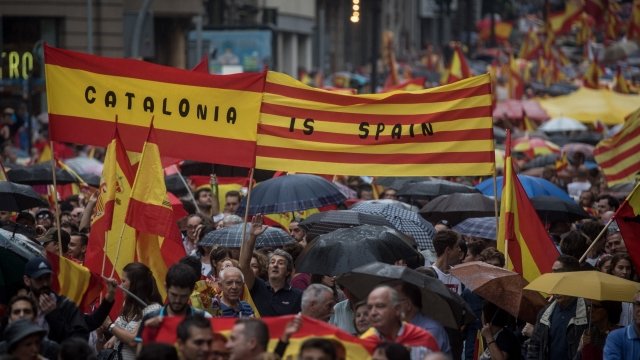 Thousands of police have been sent to the region to shut down voting.

Catalonia is scheduled to hold a long-awaited referendum vote Sunday, but Spain is putting a lot of effort toward making sure that doesn't happen.

Spain's constitutional court suspended the referendum in early September. Officials have declared it illegal and vowed to "stop at nothing" to prevent it. Thousands of police have also been sent to the area to shut down voting.

A Region In Spain Took A Step Toward Secession

Catalonia's Parliament passed a measure to let its citizens vote on whether to seek independence.

Catalonia is an autonomous region within Spain; it has its own government and its own language. Its separation from Spain has been an issue for decades.

Activists in Catalonia are reportedly posting up at schools to keep them open so people can cast their ballots.

Those ballots will ask: "Do you want Catalonia to become an independent state in the form of a republic?"