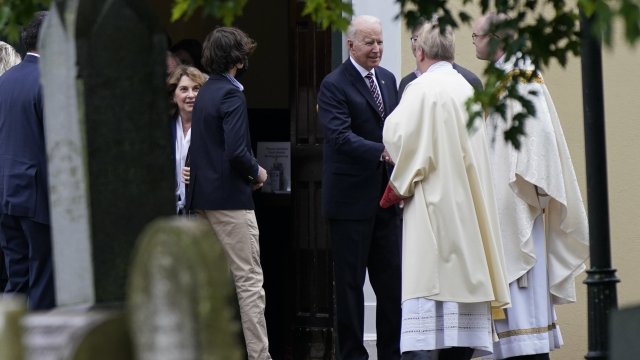 A formal document outlining eligibility to receive communion could mean certain lawmakers, including the president, could be rejected at mass.

President Joe Biden is open about his Catholic faith. But his commitment to the church could be challenged this week.

“When someone is involved in something that's very evil, it's they're not properly disposed to receive Holy Communion," said San Francisco Archbishop Salvatore Cordileone.

Archbishop Cordileone is one of several Catholic archbishops who support withholding communion from pro-abortion rights lawmakers. This week, the U.S. Conference of Catholic Bishops is expected to discuss whether that opinion should be recognized in a formal statement.

“The duty of a pastor is to help people form their consciences correctly and well and lead them to be properly disposed," Cordileone said.

Even if withholding communion gets enough support to move forward, plenty of obstacles remain. The archbishop of Washington said President Biden will always be able to receive communion at churches in his diocese, where the president frequently attends mass. The Vatican warned a move by the bishops could “become a source of discord rather than unity.” And a majority of American Catholics say President Biden should be able to receive communion.

“The communion rail is really problematic and deeply offensive to me. And I think many Catholics want to protect what is a holy sacrament from the culture wars," said John Gehring, Catholic program director of Faith in Public Life.

John Gehring, who attends mass at St. Matthew’s in downtown Washington, worries a move like this could drive people away from the church. Instead, he’s urging leaders to approach reducing abortion differently.

“Changing hearts and minds has to do with engaging and persuading and sitting down with people looking for common ground," Gehring said.

And critics wonder whether the church will stop offering communion to lawmakers who support other anti-Catholic policies, like the death penalty. Archbishop Cordileone says the statement would apply to more than just abortion.

President Biden, seen attending mass as recently as Sunday, hasn’t commented on the statement. If it moves forward, it would be a huge break from how church leaders have approached pro-abortion rights lawmakers in the past.