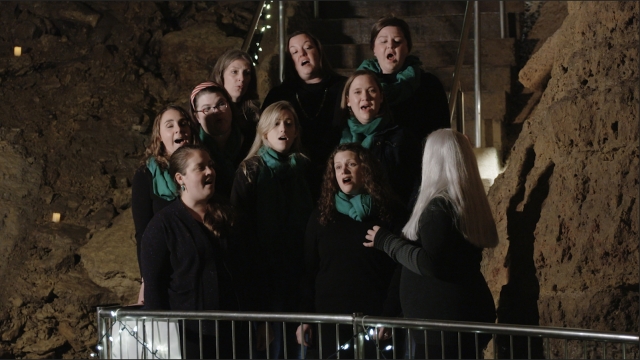 The greenTONE a cappella group has been performing holiday carols at Wisconsin's Cave of the Mounds since 2010.

It's not your typical concert hall but rather an acoustical theater created by mother nature herself. Its called the Cave of the Mounds in Wisconsin — a national, natural landmark.

"The cave atmosphere amplified everything to be even more beautiful than just in any other setting," geologist and concert attendee Cameron Batchelor said. "So it's really awesome, and it put me in the Christmas holiday spirit."

The greenTONE a cappella group is back inside performing their holiday songs after a year off due to COVID. They've been singing carols since 2010.

"I like when they slowed, they got soft and then amplified it up," Batchelor said.

Laura Kruschke is the director of greenTONE a cappella.

The best part about performing in a cave? No other equipment is necessary — no microphones, monitors or speakers and Kruschke says it's a relief.

"All of that," she said. "We get to just completely, mentally and physically set aside because we get to just be in this amazing acoustical and very beautiful environment."

The Cave of the Mounds is more than a million years old. Water created the cave and its formations, such as stalactites and stalagmites, that take a lot of time to grow.

Jan Okeson is the operations manager of the cave. She said, "Down underground in a cave, the formations you'll find are pretty standard. And you might remember them from grade school. But the ones from the ceiling are the stalactites and the formations like these on the floor are called the stalagmites. A fun way to remember which is which — the stalactites hang tight to the top and the stalagmites might grow up there some day."

The limestone cave maintains a temperature of 50 degrees year round. It's damp with water dripping from the tops of the cave.

"Although we get a lot of people in here for our concert and the sound sort of echoing through the walls, it really feels magical to me," Okeson said.

The concert is a charity fundraising effort. Throughout the years they have raised $12,000 to date.

And if you're more of the singing type, there's also a sing-along tour.

"Caves are a great place to visit," Okeson said. "If you're not close enough to visit us in the immediate future, we have caves throughout the entire country that are really neat to visit."