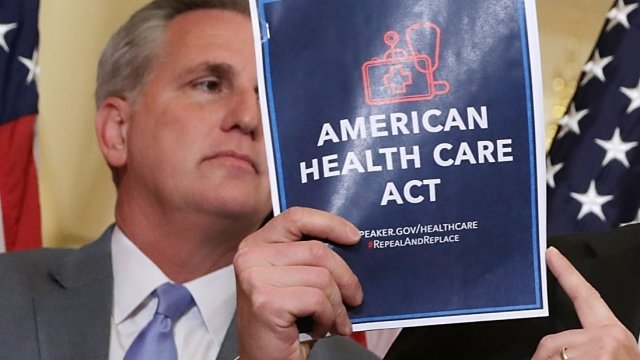 The nonpartisan agency says the Republican plan will leave 22 million people uninsured over the next decade.

The Congressional Budget Office's report on the Senate GOP health care bill is in.

The nonpartisan agency says the Senate Republicans' plan will increase the number of uninsured people by 22 million by 2026.

The CBO projects the bill will cut the federal deficit by $321 billion over 10 years.

And it will reduce Medicaid enrollment among people under 65 by an estimated 16 percent.

Compare those numbers with the House's American Health Care Act. The CBO estimated that by 2026 the bill would reduce the deficit by $119 billion, but it would increase the number of uninsured folks by 23 million, a million more than the new bill.

Does Trump's Budget Cut Medicaid Funding? No One Seems To Know

Lawmakers have criticized the budget's impact on Medicaid, with the estimated funding cuts ranging from $600 billion to $1.4 trillion.

The CBO's score might hurt efforts to rally more support for the Senate bill. A handful of Republican senators have voiced concerns about the legislation.