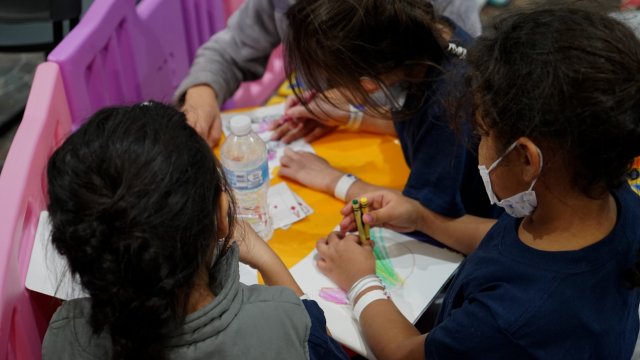 That figure is about double the number of unaccompanied kids CBP picked up in February, and more than five times the number from March of last year.

NEWSY TONIGHT HOST CHANCE SEALES: This time of year, border crossings tend to go up. But this year's different. And the system is overwhelmed. Lauren Magarino joins me from Chicago. Lauren, numbers have been climbing for several months, and it's not slowing down.

NEWSY REPORTER LAUREN MAGARINO: Chance, the number of unaccompanied migrant children apprehended last month is staggering. Take a look at this: This graph shows how many unaccompanied migrant children Customs and Border Protection apprehended from 2018-2021. And I'm sure you can see the clear sharp incline with that Newsy blue line — with apprehensions hitting at nearly 19,000 minors in March, which is about double how many CBP picked up in February and more than five times the number in March of last year.

I want to show you perspective on what nearly 19,000 people like looks like. CBP picked up enough minors in one month to fill the Staples Center for a basketball game.

Now, a majority of migrants arriving at the southern border come from Mexico, and most are adults, but if you look at CBP data on migrants from Honduras and Guatemala, you start to see more families or children migrating.

SEALES: Lauren, thousands of minors are being packed into some facilities. And now we're hearing some allegations of abuse and neglect in Texas. This is the governor; take a listen.

GOV. GREG ABBOTT: "The Texas Health and Human Services Commission and the Texas Department of Family and Protective Services separately received tips that allege child abuse and neglect at the federal government's child migrant facility at the Freeman Coliseum in San Antonio behind me."

SEALES: He called this a byproduct of President Biden's open border policy and lack of planning. What else do we know, about these allegations?

MAGARINO: Gov. Abbott listed four complaints that were sent to the state agencies, but they weren't specific. One was children being sexually assaulted. We don't know by whom, employees or other migrants or both. The second was there isn't enough staff to properly supervise children. The third was that children aren't eating enough, and fourth that children with COVID aren't separated from those without it. Health and Human Services issued a statement in response saying it does not discuss individual cases as a matter of privacy, Chance.