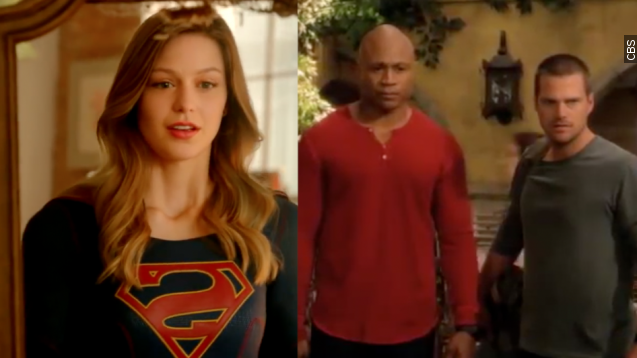 CBS will postpone episodes of 'Supergirl' and 'NCIS: Los Angeles' because their plots had similarities to the recent terrorist attacks in Paris.

CBS is changing its Monday lineup in response to the terror attacks in Paris Friday.

A CBS insider told TVLine Monday's episodes of NCIS: Los Angeles and Supergirl were slated to have plot lines that were similar to the violence that left more than 120 people dead.

The original episode of Supergirl was going to depict the heroine trying to save her city from multiple bombings.

NCIS: LA planned to have a show focused on rescuing a teenager who joined a group of terrorists. Both will be replaced with different episodes.

These two shows continue a trend of networks pulling TV shows that are eerily similar to real world violence.

In August, USA Network postponed the season finale of its hacker-drama Mr. Robot because the show contained a scene that was similar to the shooting of two journalists on live TV in Roanoke, Virginia.

The shock from the Paris attacks was felt all over the entertainment industry. NBC sitcom Undateable canceled a live episode on Friday, the day of the attacks. And Saturday Night Live nixed an opening monologue in favor of a message of support for Paris.

"Paris is the city of light. And here in New York City, we know that light will never go out. Our love and support is with everyone there tonight. We stand with you," Cecily Strong said.