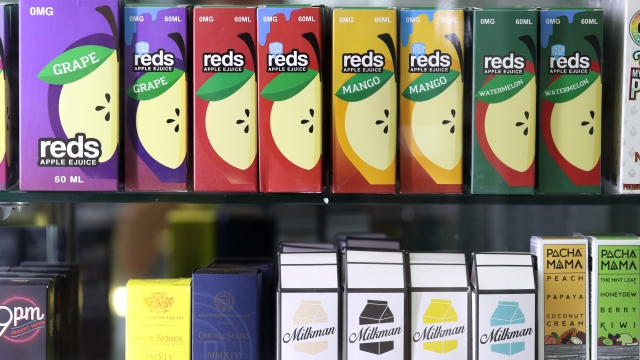 The Centers for Disease Control is also sounding the alarm over advertising for e-cigarettes that it says corresponds with a spike in teen use.

The Centers for Disease Control is now reporting 380 cases of lung illnesses and six deaths resulting from e-cigarettes.

The CDC announced Thursday there are confirmed or probable cases of vaping-related illnesses in 36 states and the U.S. Virgin Islands. Some of those sickened were using marijuana concentrates, which is raising concerns over additives in the products.

The CDC is also sounding the alarm over advertising for e-cigarettes through retailers, the internet and other sources, the breakdown shown here. It says that corresponds with the spike in teen use, shown here.

More than 20% of high school students surveyed in 2018 reported using e-cigarettes in the past 30 days, up from just 1.5 percent in 2011. Nearly 5 percent of middle school students used vaping products, an eight-fold increase.

E-cigarettes are by far the most-used tobacco product among teens, ranking well ahead of traditional cigarettes and other products.

Amid concerns over such marketing, Health and Human Services Secretary Alex Azar said earlier this week he's instructing the FDA to draft a plan to remove flavored tobacco products from the market. The move could trigger legal challenges from industry.

"What we've seen and what the data just shows the kids are getting access to these products in spite of our best efforts at enforcement, at retail enforcement," Azar said.

Backing a federal crackdown, the president said he wouldn't let his underage son use vaping products.

"Vaping has become a very big business, as I understand it, a giant business in a very short period of time. We can’t allow people to get sick. And we can't allow our youth be so affected."

The president is getting pushback from the American Vaping Association, particularly over restricting flavored products.

"E-cigarette use, yes, is up. And we should combat that with appropriate marketing controls, with perhaps tobacco 21, with increased licensing and enforcement at the state level. But simply prohibiting flavors used by 13 million Americans? It is a disaster for public health and it's going to be a disaster for President Trump's re-election campaign as well."

The CDC is investigating specific causes of recent illnesses. Meanwhile, it warns against buying e-cigarette products off the street, saying they may be unsafely modified.