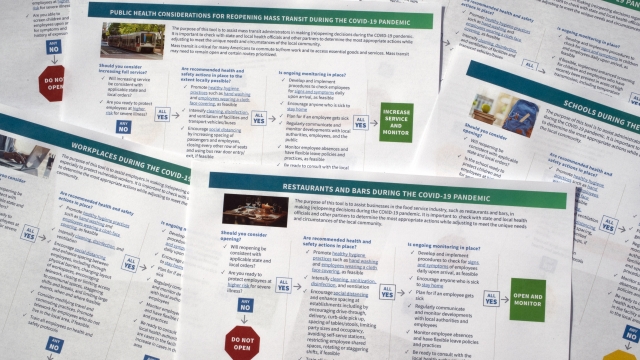 The CDC released new guidance on how schools, restaurants, and other businesses can reopen safely in the U.S.

The agency posted its "decision tools" on its website Thursday — one each for schools, workplaces, child care programs, camps, mass transit systems, and bars and restaurants.

The one-page checklists all recommend each type of public space should not open if they would be violating local orders. The CDC says each should also increase cleaning, promote good hygiene and provide ways for people to maintain social distance from each other.

The guidelines say schools, camps, and daycare facilities should implement ways to screen children and employees for COVID-19 symptoms. The CDC wants similar monitoring in place at other businesses, saying all need to have flexible leave policies in place for employees who get sick.

The guidelines come after the White House reportedly refused to publish the CDC's previous version, which was more detailed, according to the Associated Press. The outlet also noted the CDC originally planned to issue guidance to churches and other religious institutions.

The agency reportedly wanted to recommend churches limit the size of gatherings and encourage parishioners to wear masks if they wanted to restart in-person services. But the AP reports the church guidance was removed after the White House raised concerns about it.

Additional reporting by Mike Stobbe and Jason Dearen of the Associated Press.