CDC Says Coronavirus Will 'Likely' Spread Within The U.S. 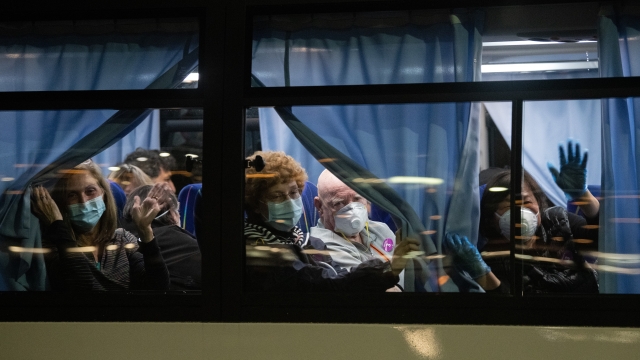 The CDC outlined what schools and businesses should do in case the coronavirus becomes an epidemic in the U.S.

The CDC said the coronavirus will "likely" spread in the U.S. and that Americans should prepare for the worst.

Meanwhile, President Donald Trump said the coronavirus is "very well under control in this country."

"The immediate risk to the general American public remains low, but, as we have warned, that has the potential to change quickly," Health and Human Services Secretary Alex Azar said.

During a press call Tuesday, the director of the CDC's National Center for Immunization and Respiratory Diseases laid out steps schools and businesses might take if the coronavirus becomes an epidemic in the U.S. For example, she said schools could divide students into smaller groups or hold classes online. She said businesses should do much the same.

According to the CDC, there are at least 53 confirmed cases in the U.S. Most of those cases are among people repatriated from the Diamond Princess Cruise Ship. Only two cases were spread person-to-person in the U.S.

The White House said it expects to allocate at least $2.5 billion to fight the coronavirus outbreak. The Trump administration said the money would go toward developing new vaccines, expanding surveillance systems and stockpiling protective equipment, like surgical masks.

"The administration has no plan to deal with the coronavirus, no plan," Schumer said.

House Speaker Nancy Pelosi said, "The President's request for coronavirus response funding is long overdue and completely inadequate to the scale of this emergency."

Senators gathered for a classified briefing on the coronavirus Tuesday. Sen. Richard Blumenthal said the briefing should have been made public.

"Because there would be an outcry and uproar if the American people heard what we have been told," Blumenthal said.

The stock market has taken a hit because of the coronavirus, falling for the second consecutive day. The Dow Jones Industrial Average closed down by 879 points, or 3.2%, on Tuesday.

Larry Kudlow, the director of the National Economic Council, downplayed the outbreak and told CNBC that while it is a "human tragedy," it likely won't be an "economic tragedy." He claimed the outbreak has been contained.