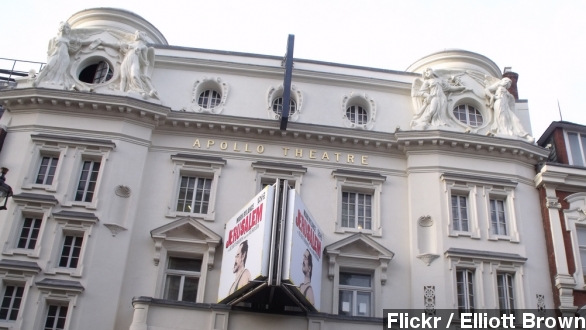 Dozens were injured when part of the ceiling caved in during a performance of "The Curious Incident of the Dog in the Night-Time."

Dozens were injured Thursday after part of the ceiling collapsed on a near-capacity crowd at London's Apollo Theatre.

The accident took place halfway through the first act of a performance of "The Curious Incident of the Dog in the Night-Time." Witnesses say the ceiling began making a crackling sound before debris started to rain down. (Via The Guardian)

A fire department spokesman told the BBC everyone who had been trapped has been evacuated.

"There were about 720 people in total in the auditorium at the time the ceiling came down. … There's 80 people injured altogether, four of them quite seriously."

Members of the audience described their experiences to Sky News and CNN.

"It was just terrifying and awful. ... We were sitting right underneath it. At first we thought it was part of the show, it was very dramatic, and then I got hit on the head with something."

"Michelle grabbed ahold of me, and we tried to get out as quick as we could. It was just pandemonium. There was panic everywhere."

"Outside there were a lot of people, they just looked black. They were just covered in soot."

Authorities say the cause of the collapse is still unknown, and emergency crews are working to make sure the building is stable. The theater was built in 1901.