A Celebration Of Black Art Shines a Light On Museums' Promises 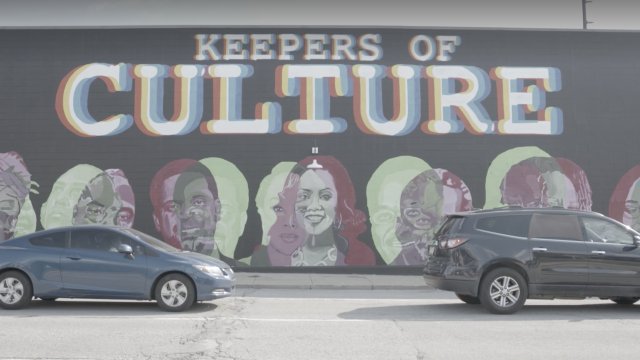 In the summer of 2020, 18 artists came together to decorate the city in honor of the Black Lives Matter Movement.

In the summer of 2020, 18 artists came together to paint the words Black Lives Matter in downtown Indianapolis.

"It was the statement for all Black and Brown children across the world that their futures matter," artist Ashley Nora said.

Nearly a week later, the words were doused with white paint. But fast forward to 2021, a single act of destruction has led to a celebration of black art and an embrace of the movement and individual artists who brought it to life.

"I'm happy with it," artist Blayne McCrary said. "I'm just happy about it and everything."

Now there's a reproduction of the street mural plus additional pieces from the artists — like "Lemonade Stand," "Soaring Possibilities" and "Giants" — at the Children's Museum of Indianapolis.

"Youth are at the forefront of everything that we do," Deonna Craig said. "We've seen eyes sparkling, questions being asked, you know careers being declared of wanting to be an artist or an entrepreneur just because they, the children have seen representation."

The work of the so-called 18 has traveled beyond the walls of the museum, from Japanese-inspired art in the northern suburbs to the keepers of culture downtown. It's as if the state has become their canvas.

During last summer's racial justice protests, corporate America and many of the country's museums made a promise to support Black Americans.

The children's museum curators say presenting the topic to young audiences was important.

"We knew it was the message that needed to be spread," said Monica Humphrey, the  Exhibits and Interactive Media Director of the Children’s Museum of Indianapolis. "We knew that there were a lot of questions around it, and we want to create a space where families can come and get questions answered."

But responding to the country's outcry has been tricky for museums. The Art Institute of Chicago is accused of firing older, white volunteers in order to make room more diverse candidates. The Indianapolis Museum of Art came under fire after a job posting indicated a desire to add diversity but maintain its, "traditional, core, white art audience." Both museums have denied ill-intent.

Newsy reached out to five of the major art museums that issued statements of  support in 2020, including the Art Institute of Chicago, the Guggenheim in New York, the Met in New York, the National Gallery of Art and the Denver Art Museum, to see what percentage of their current collection is from Black artists and if that's a change from last year.

Two responded to the question.

A spokesperson for the Guggenheim in New York said, "Prioritizing the presentation of Black, Indigenous and people of color was fundamental to recent exhibitions," and that "the expansion and diversification of their collection is an ongoing priority, pointing to several new pieces."

Alan Bacon and Mali Simone Jeffers are curators and the founders of GangGang.

They're part of a team that brought the 18 artists together, and their mission is to create spaces for Black artists to shine.

"Much of what we do is kind of joy-based, love-based programming because we think that that's the sustainable path toward actually ending racism,"Jeffers said. "It's not only you know, cultural sensitivity trainings and very solemn rooms where we come together and have very serious conversations. Those are important, but we also need bright, sustainable and fun paths that bring people together."

Their hope is to elevate the conversation from the nation's current focus on Black art to a longlasting embrace of Black artists.

"I hope that this is not just a trend because we have a lot to say," Solomon said.

"There are institutions that need work," Nora said. "We are just as talented. It's like don't give us anything, if our talent speaks, allow us to be in these places."