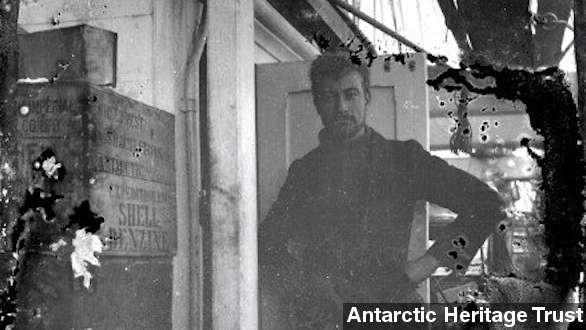 A recent discovery at an an old Antarctic supply camp has revealed photos of a historic expedition frozen in time for almost 100 years.

The Antarctic Heritage Trust uncovered a box of 22 photo negatives in a Cape Evans supply hut established in 1911 by British Explorer Sir Robert Falcon Scott. The frozen photos, taken circa 1915-1916, have suffered remarkably little damage over the years. They mostly depict scenic images of the frozen landscape, with a few shots of crew member Alexander Stevens. (Via 3 News, Antarctic Heritage Trust)

Trust director Nigel Watson celebrated the find as "the first example that I'm aware of, of undeveloped negatives from a century ago from the Antarctic heroic era. There's a paucity of images from that expedition." (Via The Press)

The hut where the images were found was initially used during Scott's doomed quest to become the first man to reach the South Pole. But the pictures were actually taken during a separate expedition several years later.

Known as the Ross Sea Party, this expedition was part of Ernest Shackleton's failed effort to cross the entire continent of Antarctica. Ten men arrived at Cape Evans in January 1915 with orders to outfit the supply depots for Shackleton's journey. (Via TVNZ)

But the group was left stranded and without most of their supplies after their ship, the Aurora, blew out to sea during a blizzard. By the time the Aurora returned two years later, three of the expedition members had died, including the presumed photographer of the rediscovered pictures Arnold Spencer-Smith. (Via Wikimedia Commons / Ernest Henry Shackleton)

A full gallery of the restored photos is available on the Antarctic Heritage Trust's website.