CEO Writes Hundreds Of Rent Checks For Those In Need 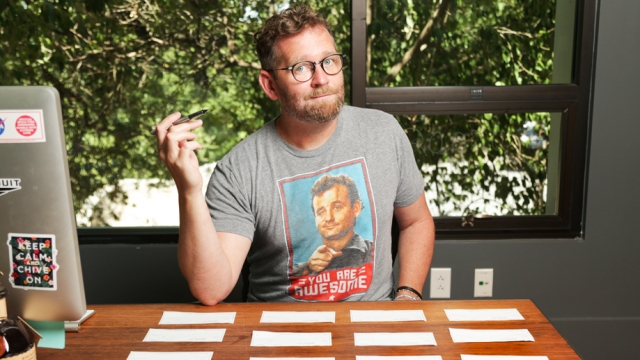 John Resig, CEO of humor website The Chive, wanted to help people who were in danger of imminent eviction.

The coronavirus pandemic has turned people's lives upside down. Tens of millions in the U.S. have lost their jobs, leaving many unable to pay their bills.

In fact, the Aspen Institute estimates as many as 40 million Americans could be at risk of getting evicted from their homes by the end of 2020.

After reading about the crisis, John Resig, CEO of humor website The Chive, decided he wanted to help as many people in imminent danger of eviction as he could.

John Resig: "So I just thought I'd grab a checkbook — um a fresh checkbook — and I told the Chive community, 'Whoever is in imminent danger of being evicted, I'm just going to write your rent checks today.' And I thought a hundred people would jump on that offer. And I think we probably had a hundred emails in the first 10 minutes."

One of those emails was from Dan Sanders. He's a special education teacher from Waupun, Wisconsin. While Sanders remained employed during the school year, the summer teaching jobs he and his wife normally have weren't available.

Dan Sanders: "With our summer plans not happening, those jobs not being available, we were really shut down to the point where I'm getting — I fear answering the phone. We are getting knocks on the door from landlords saying, 'Hey, we'll do something with ya, but we need something.' And we just don't have it right now. … We were on the brink of getting out of the apartment, on the brink of losing our car."

After realizing how many people in the Chive community needed assistance, Resig set up a GoFundMe account and ended up raising more than half a million dollars.

Resig wrote a $500 check to anyone deemed to be in imminent danger of getting evicted. He told Newsy he probably wrote between 800 and 900 checks.

John Resig: "Not just write them checks, but write them a card that acknowledges you've read their story. Most of these people just wanted someone to listen to them. They're reaching out telling you their deepest, darkest secrets that maybe their spouse doesn't even know they're about to be evicted. So you want to let them know that their voice was heard as much as writing the check."

Resig didn't turn down the idea of writing more rent checks in the future — but he also hopes this will encourage others to similarly help those in need.

John Resig: "The eviction crisis in America is very real. And it's not going anywhere. And we're not going to be able to sweep it under the rug —certainly when we start seeing our streets fill up. That's something you can't ignore."