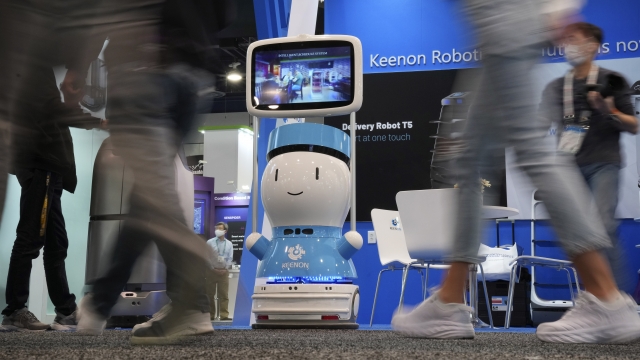 The Consumer Electronics Show in Las Vegas highlights some of the year's innovations in technology, showcasing robots that have been developed to handle everyday tasks.One robot that's already emerged in the South Korean market follows you around, hauling your luggage and even taking it to your room, and it doesn't even expect a tip. All it needs is the guidance of a human being.

Bellhops may not be too impressed, and restaurant bussers may want to throw water at another new robot that wants to do their job for them. That robot can navigate around restaurants, collecting plates, glasses and other dirty dishes. The model goes for around $18,000 and is already being put to use in restaurants in China. Another robotics company hopes you'll be so fed up with shoveling snow that you'd shell out $3,000 to $4,000 for the Snowbot — the world's first smart snow-clearing robot. You use beacons to set a perimeter and let the snow blower do its thing. Eighty of them are being beta tested this winter.A South Korean company has also created a prototype of a robot designed to autonomously move through a parking garage and charge electric vehicles. However, this is the first prototype, so the company doesn't have a timeframe for when you might see one of them at a garage near you.All of these are examples of how the next generation of robots — empowered by artificial intelligence — are offering potential solutions for tasks more consequential than fixing us a cup of coffee.

How Is Automation Transforming The Economy?

Robots are already changing the way we commute, deliver goods, care for patients, and even what we do in the bedroom.