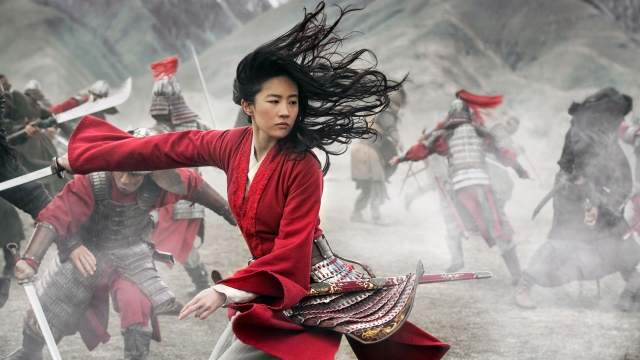 The actor who brought "Black Panther" to life on the big screen is being remembered as a hometown hero.

The city of Anderson, South Carolina, held a public memorial for Chadwick Boseman with a special viewing of the iconic "Black Panther" movie. City leaders say Boseman is an inspiration to many young people.

"Black Panther" is hailed as one of the best celebrations of Black art and culture.

Boseman died last week after a battle with colon cancer. He was 43 years old.

Lauren Magarino: "'Mulan' is now playing on Disney+, and as it becomes one of the biggest movies to debut on a streaming platform, it's also dealing with online piracy."

Casey Mendoza: "The live-action remake of 'Mulan,' the story of a woman who disguises herself as a man to become a soldier, debuts on Disney+ on Friday. While many fans of Disney's take on the Chinese legend will pay the additional fee to purchase the movie, others — those less willing to fork over $30 on top of a subscription — may seek out or come across less legitimate venues to watch the film. We're talking about online piracy. But in the age of the so-called streaming wars, the pirates have upped their game."

Asaf Ashkenazi, content security expert and chief operating officer at Verimatrix: "Now, there are many streaming services that are pirate streamers, but they look legitimate. … They get the content from Netflix, from Disney and it's good quality. Back in March, digital piracy experts at MUSO found that visits to film piracy sites in the U.S. increased by more than 40 percent during the coronavirus lockdown. Days after "Tenet" and "New Mutants" opened in theaters, low-quality pirated versions of the films made their way online as well. Companies like Warner Bros. and Disney are keenly aware of the pirates trying to steal their content. After Disney+ launched, the company reportedly began hiring more people for its "piracy intelligence team."

Mendoza: "We don't know exactly what Disney's anti-piracy initiatives look like, but for viewers considering pirate streaming sites, it's worth pointing out the drawbacks: including the inconvenience of finding these sites in the first place and not knowing if these platforms are secure or if they could share your information."

Ashkenazi: "If something looks free or too good to be true, then probably it's not. It means that they have to make money somehow, and it could be that they make money out of you."

Mendoza: "For viewers who don't want to pay the added fee on Disney+, the live action remake of 'Mulan' will also be available for all subscribers starting in December."

Magarino: "Newsy's pop culture reporter Casey Mendoza joins us now. Casey, has online piracy ever really gone away? I can't believe that this is a conversation right now at this point. Has it changed? Has it modernized?"

Mendoza: "So that's a great question and the answer is not really, you know. While it is true that online piracy became less common once streaming and streaming services made everything more accessible and cheaper than say, buying movies or TV shows. But online piracy was still around, and it's seen a bit of a resurgence due to both the glut of streaming services and the pandemic. And what makes them different now is the fact that they look more legitimate than the nostalgic sort of, adds pop up everywhere pirate streaming sites that we had a decade ago."

Magarino: "I can remember, you know, the ads kind of popping up and the quality of that all. What things do streaming companies actually do to combat piracy at this point?"

Mendoza: "Of course, so some things are very technological, like platforms like Netflix or Hulu will sometimes disable screen recording or screen shotting on their platform, and that makes it harder for pirates to actually grab the video. But beyond that, one of the easiest ways that the entertainment industry as a whole can actually deter piracy is actually just find more ways to make their content more accessible, whether that means making it cheaper or even free or even a free trial will help deter someone from searching for an illegal platform to watch a film or a movie."

Magarino: "So do online pirates really think they can steal from Disney? I feel like you've got to have major confidence to try to pull that one off."

Mendoza: "So they're most certainly going to try. And one thing I've heard from several content security experts is that piracy will never truly go away, no matter how many barriers a company can put in place. But like you said, Disney is also notoriously and sometimes scarily protective of their properties. And for a major title like 'Mulan,' which was supposed to go to theaters and make millions and millions of dollars, they are likely going to crack down even harder with takedown requests and legal action. If they catch anyone trying to steal from them, they're going to be protective about this film."

Magarino: "I mean, I get it. We've been waiting for it and because it's been pushed out, push down. And finally it's available to us. I mean, better be protective about it. Newsy's Casey Mendoza. Thank you."