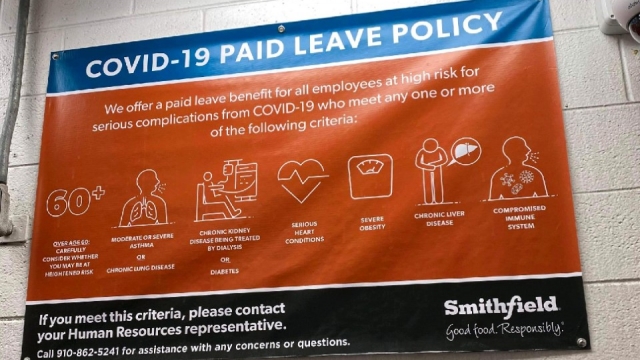 At least 97 employees at a North Carolina Smithfield plant have tested positive for COVID-19 as the plant makes changes to keep workers safe.

At the Smithfield pork processing plant in Tar Heel, North Carolina, Newsy has confirmed at least 97 positive cases of COVID-19 among workers at the plant. And as the number of confirmed cases continue to rise, the plant has made some changes to improve worker safety.

Employees have exclusively sent Newsy dozens of photos and videos from inside the plant that show the progression of changes they have seen in the last few weeks.

This video from April 20 showed long lines of employees waiting to talk with human resources, making it difficult to practice social distancing.

Now, in this photo from May 4, a sign tells workers “do not go to human resources” with COVID-19 questions. Instead workers are instructed to call this new hotline number.

“You have reached the Tar Heel COVID-19 hotline. Please leave your phone number and a detailed phone message. We will return your call within 24 hours, Monday through Friday.”

In the lunchroom, the cafe was closed last week — but workers can still eat there, separated by plexiglass dividers.

Now, new tents are set up outside of the facility, adding more break and eating areas for workers, making it easier to practice social distancing.

And over the weekend, these large signs were posted around the plant defining who qualifies for a paid leave policy for “high risk” employees.

Employees tell Newsy in some of the plant's production areas, shifts last week were reduced to five hours a day, and workers were getting paid for a full eight-hour shift. They told us this shift change helped decongest the workplace.

But according to six people working in the production areas of the plant, regular hours were reinstated this week, and Saturday shifts became mandatory “until further notice”.

Many of the changes in Tar Heel came after the CDC and OSHA released new voluntary interim COVID-19 guidance for meat packing and processing plants, which Smithfield says it's following.

In a press release issued Monday, Smithfield said, “At the core of the company’s COVID-19 response is an ongoing focus on employee health and safety and continued adherence with — at a minimum — the CDC and OSHA guidance.”

The company also released these photos, and a spokesperson told Newsy they “are representative of the measures in place across all of Smithfield facilities.” Although they would not give any details about when the photos were taken and which plants the photos were from.

On its website, Smithfield said it will not confirm how many COVID-19 cases are at its plants, “Out of respect for our employees' legal privacy.”

Employees at the Tar Heel plant continue to raise concerns about a lack of transparency about the spread of the virus at the plant, and many are asking for mandatory testing of every employee.

“I think to make us all feel safe, they should get everybody tested,” said one employee.

This worker, who asked not to be identified and to alter her voice for fear of retaliation, said she worked side by side with others for days before testing positive for COVID-19.

“I talked to these people every day while I was at work, not knowing I was positive. So it's a good chance they could have the virus. It doesn't make me feel safe at all,” the employee said.

In a letter posted on the employee app, Beekeeper, Smithfield's CEO wrote, “We expect to begin offering more testing to our employees as early as next week.” Smithfield did not respond to Newsy’s questions about this announcement and whether the Tar Heel plant in North Carolina will be receiving tests.

According to the CDC, there is currently no evidence to support the transmission of COVID-19 through food.