Here's How Bad The Los Angeles Chargers' Attendance Really Was 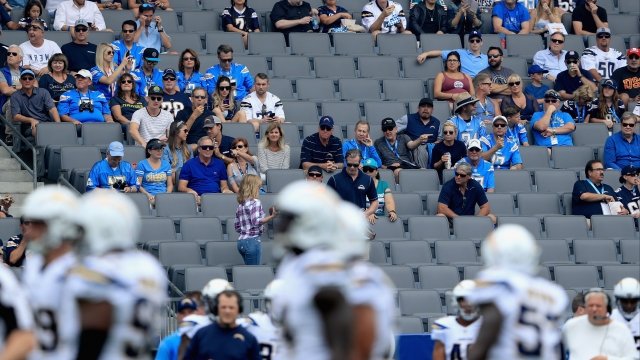 On Sunday, the Los Angeles Chargers football team had their home opener in a small soccer stadium. And they didn't sell it out. Just over 25,000 people showed up to a stadium that holds 27,000.

Having a rough game attendance-wise is one thing, but this was the Chargers' first game back in LA. That's important because that's the sort of thing that usually spurs a big boost in attendance.

The Chargers' turnout for their debut at the StubHub Center falls short compared with some of the other newest pro sports franchises in the U.S. The Washington Nationals baseball team and Houston Texans football team both sold out their first home games in much larger venues.

Even the LA Galaxy, a Major League Soccer team that plays in the StubHub Center, sold out their first game at the stadium in 2003. Several other soccer teams have done the same in recent years with their new stadiums.

On top of that, the NFL's Los Angeles Rams, who moved to LA before the 2016 season, drew 91,000 fans for their first home game that year at the massive LA Coliseum. They'd finish second in the league in home attendance that year — though their crowd for their 2017 opener fell short of expectations.

Not all the fans at the game were there for the Chargers, either. Fans of the visiting Miami Dolphins were everywhere — Chargers running back Melvin Gordon called the crowd "around 50-50" Dolphins and Chargers fans.

A Green Bay Packers fan filed a lawsuit after he said he was barred from wearing his team's colors to Chicago Bears events.

All this is probably music to the ears of some Chargers fans, a lot of whom were upset with owner Dean Spanos for moving the team from San Diego to LA.

There is some good news here for the Bolts: The StubHub Center is only their temporary home. They'll be moving in with the Rams in an expensive new stadium in 2020. The teams are hoping that place will bring in more fans.

For its part, the NFL says it isn't worried about the lack of attendance. A spokesman said Monday the league still believes Los Angeles can support two NFL teams.