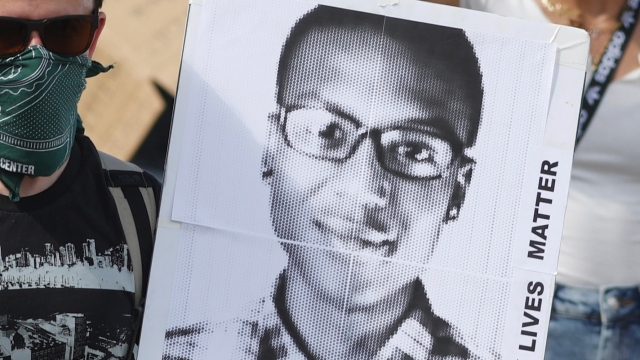 In 2019, the 23-year-old was confronted by police and injected with a powerful sedative that caused a fatal heart attack.

Two years and one day after 23-year-old Elijah McClain died after this disturbing encounter with Aurora Colorado police and paramedics, three officers and two paramedics are facing criminal prosecution.

"The Grand Jury returned a 32-count indictment against Aurora police officers Randy Roedema, Nathan Woodyard, Jason Rosenblatt and aurora fire rescue paramedics Jeremy Cooper, and Peter Cichuniec for their alleged conduct on the night of August 24, 2019 that resulted in the death of Mr. McClain," he said. "Each of the five defendants face one count of manslaughter and one count of criminally negligent homicide."

Arriving officers confronted McClain, holding him down as he pleaded for his life.

In body camera footage, you can hear McClain saying, "I'm just going home. I'm just different. That's all I was doing. I'm so sorry. I have no gun. I don't do that stuff."

To calm McClain down, paramedics injected him with a powerful sedative.

McClain, a 23-year-old massage therapist who was unarmed and committed no crime, had a heart attack and was taken off life support a week later.

"We're here today because Elijah McClain, is not here, and he should be," Weiser said. "He was a son, a nephew, a brother and a friend. He was only 23 years old he had his whole life ahead of his family and his friends must now go on and live without."

The local district attorney declined to prosecute the officers or paramedics. But in June 2020 Colorado Governor Jared Polis ordered a new investigation run by the state attorney general.

A separate independent investigation found police had no legal basis to stop McClain – and that the department failed to conduct a proper investigation. It also found that paramedics injected McClain with too much of the Ketamine sedative.

"I wish they'd been better people," she said of the first responders. "I wish they had shown more humanity to my son like he did to them as they were murdering him. It would have been nice if they actually deserved to wear that badge."

The officers and paramedics are facing charges including assault in the 32-count indictment. McClain's death also helped lead to police reform and accountability laws in Colorado.