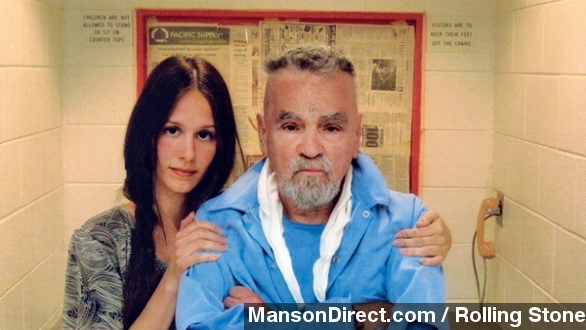 Charles Manson has this sadly brilliant way of managing to make it back into the headlines, doesn't he?

This time, it's because a 25-year-old woman named Star says she's ready to marry the 79-year-old convicted killer. He gave her that name, and she recently cut an X into her forehead for him. (Via KABC)

The story started with this Rolling Stone interview with Manson and Star. She tells the mag they're getting married and she already considers Manson her husband.

​​She sees him on weekends, up to five hours a day both Saturday and Sunday. Many visits are cataloged on this pro-Manson website. (Via MansonDirect.com)

And all this has Geraldo Rivera asking: "Why is Manson so charismatic to this new generation? I remember when 'Manson' was the biggest-selling T-shirt in the country. He has this dark appeal." (Via Fox News)

Well, Charles Manson's official Facebook page has about 11,500 "likes." Not terrible, but certainly not impressive by today's social media standards.

CNN spoke with Star back in 2009 and says actually, when she first discovered Manson years ago, it was was apparently for his environmental writings. She did not know he was a convicted murderer.

"What is it about him, compared to other people you've met in your lifetime, that makes him so unique and different?"

"Charlie always tells the truth. No matter what."

Well, the truth is, he's one of the most infamous and terrible convicted murderers of all time. But late-night hosts had fun playing with the unknown — like how these two really first connected.

However they met, there seems to be some contention in the happy couple over whether they actually are getting married.

Because Manson told Rolling Stone: "That's a bunch of garbage. You know that, man. That's trash. We're just playing that for public consumption."

Well, it's working. Oh, and in case you were wondering, Manson and Star don't get conjugal visits. "Lifers" don't get them in California.