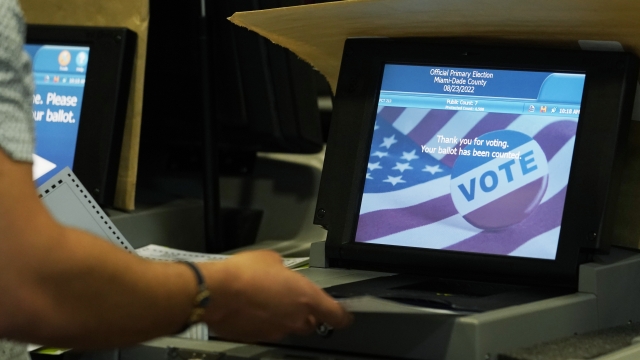 Florida Gov. Ron DeSantis is poised to learn the identity of his general election opponent on Tuesday as Democrats choose between a man who spent a lifetime in politics — much of it as a Republican — and a woman casting herself as "something new" as she seeks the energy of her party's resurgent base.

The Democratic establishment has largely lined up behind Charlie Crist, a 66-year-old Democratic congressman who served as the state's Republican governor more than a decade ago. Running now as a moderate Democrat, Crist is facing 44-year-old Agriculture Commissioner Nikki Fried, who hopes to become the state's first female governor while leaning into the fight for abortion rights.

The race is ultimately a debate over who is best-positioned to defeat DeSantis, who emerged from a narrow victory four years ago to become one of the most prominent Republicans in politics. His relatively light touch handling the pandemic and his eagerness to lean into divides over race, gender and LGBTQ rights have resonated with many Republican voters who see DeSantis as a natural heir to former President Donald Trump.

His reelection effort is widely assumed to be a precursor to a presidential run in 2024, adding to a sense of urgency among Democrats to blunt his rise now.

Voters will choose Tuesday between U.S. Rep. Jerry Nadler and U.S. Rep. Carolyn Maloney in a rare face-off between incumbents due to redistricting.

The Florida contest wraps up the busiest stretch of primaries this year. Republicans from Pennsylvania to Arizona have supported contenders who have embraced Trump's lies that the 2020 election was stolen, an assertion roundly rejected by elections officials, the former president's attorney general and judges he appointed.

And for the most part, Democrats have avoided brutal primary fights. That could be tested Tuesday, however, as voters in New York participate in congressional primaries that feature two powerful Democratic committee chairs, Carolyn Maloney and Jerry Nadler, competing for the same seat and other incumbents fending off challenges from the left.

Democrats are entering the final weeks ahead of the midterms with a sense of cautious optimism, hoping the Supreme Court's decision overturning a woman's constitutional right to an abortion will energize the party's base. But Democrats still face tremendous headwinds, including economic uncertainty and the historic reality that most parties lose seats in the first midterm after they've won the White House.

The dynamics are especially challenging for Democrats in Florida, one of the most politically divided states in the U.S. Its last three races for governor were decided by 1 percentage point or less. But the state has steadily become more favorable to Republicans in recent years.

For the first time in modern history, Florida has more registered Republicans — nearly 5.2 million — than Democrats, who have nearly 5 million registered voters. Fried serves as the only Democrat in statewide office. And Republicans have no primary competition for four of those five positions — governor, U.S. Senate, attorney general and chief financial officer — which are all held by GOP incumbents.

Democrats hope that U.S. Rep. Val Demings, who faces a little-known candidate in her Senate primary Tuesday, can unseat the state's senior U.S. senator, Republican Marco Rubio, this fall. But for now, the party's national leadership is prioritizing competitive Senate contests in other states, including neighboring Georgia, Arizona and Pennsylvania.

In Florida's governor's race, the Supreme Court's abortion decision has animated the final weeks of the Democratic primary.

Fried has promoted herself as the only true abortion-rights supporter in the race, seizing on Crist's appointment of two conservative Supreme Court justices while he was governor.

The conservative-leaning court will soon decide whether the Republican-backed state legislature's law to ban abortions after 15 weeks is constitutional. Florida's new abortion law is in effect, with exceptions if the procedure is necessary to save the pregnant woman's life, to prevent serious injury or if the fetus has a fatal abnormality. It does not allow exemptions in cases of rape, incest or human trafficking.

Crist insisted he is "pro-choice" and highlighted a bill he vetoed as governor in 2010 that would have required women seeking a first-trimester abortion to get and pay for an ultrasound exam.

In experience and personality, voters have a clear contrast between Crist, an establishment-backed lifelong politician viewed as a relatively safe choice, and Fried, a newer face who may be in better position to catch fire with the party's most passionate voters.

Meanwhile, Fried has gained twice as many followers on every social network and is quick to jump on online trends. She built her profile as one of DeSantis' fiercest opponents, regularly challenging him on policy related to the COVID-19 pandemic. She also created a position within her department to ensure LGBTQ members are given opportunities as DeSantis wages what the Human Rights Campaign recently described as "an assault on transgender Floridians."